On September 16, 2022, 22-year-old Mahsa Amini died in Tehran after being arrested by police. Amini was detained by Iran’s ‘Guidance Patrol,’ the country’s religious morality police who arrested Amini for allegedly not wearing her hijab according to the country’s Islamic dress code. Amini’s death sparked protests in Iran over the Islamic Regime’s methods of rule and repression. Protesters have faced violence and crackdown from government forces who have retaliated by deploying security forces, resulting in thousands of arrests and hundreds of deaths. This movement, known as the ‘Women, Life, Freedom’ protests, has united people across the world as protests spread internationally. On Saturday, October 22, U.S. cities as well as Germany’s capital, Berlin, saw protests with thousands of attendees congregating to stand in solidarity with Iranian women. Women have been at the forefront of the movement, waving their headscarves in the air, setting them on fire, and even cutting their hair in public. In a show of protest, various artists have used their talents as a platform to propel statements about the current situation in Iran. 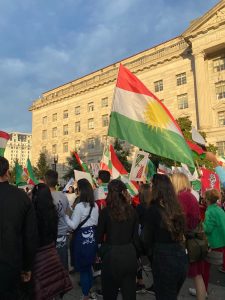 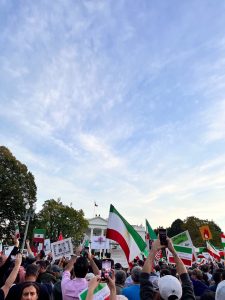 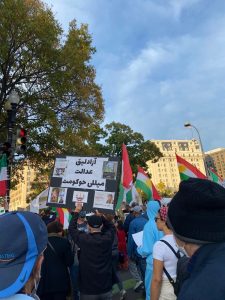 Art has long served as a powerful form of protest in times of civil unrest, political shifts, and in activist movements. Persian art, present and ever-growing, is an influential and unique type of Middle Eastern art. Persian art is one of the richest art heritages in the world, with its earliest influence dating back to approximately 550 BCE. It is made up of mostly painting, pottery, sculpture, metalworking, calligraphy, weaving, and architecture, among other entities. As the historic region of Persia developed, Persian art gave and received multiple influences from neighboring countries and regions such as Sumerian, Greek, and Chinese art, which impacted the style seen in the artworks today.

The Guggenheim Museum, a world-renowned museum in New York City with a comprehensive collection of 20th-century and contemporary art, has been the scene for a Women, Life, Freedom art demonstration. On October 22, 2022, Iranian artists staged a protest standing with the Iranian people against the death of Amini. The group known as Anonymous Artists for Iran unveiled a series of banners with the ‘Women, Life, Freedom’ slogan as well as the face of Amini from the top of the museum’s rotunda. In a statement issued by the artists, the group stated that the demonstration is a “call for action to support the current revolution in Iran.” Although the Guggenheim has not made an official message responding to the piece, museum authorities did not take action or oppose the movement. This demonstration comes after Western museums have stayed silent as protests have continued and intensified. While these institutions have stayed silent, Iranian artists have spoken about the silence in the art community following these past weeks. Iranian Artist Shirin Neshat, who has been frequently featured at the Guggenheim, applauded the protestors, calling them “the conscience of the sleepy art world who cares little for Iranian women fighting for basic human rights and freedom.”

Although the Guggenheim demonstration may be a solo act within the museum world, artists in different entities have expressed their opinions artistically. Multiple graphic designers, for example, have used their talents in illustrations to stand in solidarity with the Women, Life, Freedom movement. For instance, Iranian graphic designer Jalz has used images of Iranian architecture to redefine the meaning of the image towards the movement. Jalz’s main source of inspiration for his most recent graphic regarding the protests was the Azadi Tower in Tehran. The tower is one of the most recognizable landmarks from the 20th century, and Jalz argued that the landmark is “the sole image of Iran’s freedom.” Wanting to “complete a sense of freedom for the female body,” the graphic designer combined the image of the tower, inspiration from Matisse’s Dance artwork, as well as the “Women, Life, Freedom” Farsi protest slogan.

Another famous graphic that has been advanced by social media platforms is by Marco Melgrati. Melgrati’s piece titled “Cut it Out” shows a man, presumably a police officer, with a baton hanging over a cliff, holding on to only the hair of a woman. The woman holds scissors, seemingly about to cut off a piece of her hair, symbolically cutting off the sole lifeline of the man. It is believed that the male figure depicts the Islamic Regime’s “Morality Police” and the power that this movement, particularly the brave women who are the foundation of it, have in dismantling it.

These artistic forms of protests have been prominent both outside of Iran and within the country. Within the country, Iranians have challenged the authority of the regime in countless demonstrations. In early October, Tehran’s fountains were dyed bright red to symbolize ‘blood like’’ pools.”  An anonymous artist dyed the water as a part of the country’s growing protests. The Twitter account with the handle 1500tasvir, which has been reporting on Iran’s crackdowns on the demonstrations, shared images of Tehran fountains spewing red water on October 7. The same Twitter account referred to these protest artworks whose title translates to “Tehran sinking in blood,” according to the Washington Post’s Kelsey Ables. The fountains were located in prominent locations around downtown Tehran: Daneshjoo Park, Fatemi Square, and Honarmandan Park. According to Voice of America, which cited BBC’s Persian service, they have since been drained.

These demonstrations, both in a traditional sense and in unique ways, illustrate the power of protest and visibility in all forms. Understanding the recent actions of the Iranian government is powerful in itself as well as the importance of not underestimating art. A historically closed-off Iranian society is asking to be heard across the world and is succeeding in its efforts. As demonstrations continue, only the future will tell what the efforts commenced by Iranian women will flourish into.