What is Sports Diplomacy? Is it the Sport of Diplomacy?

Not entirely. As the world becomes more globalized through trade, travel, and media, new forms of diplomacy have emerged like digital, health, cultural, and most importantly, sports diplomacy. Unlike other forms of diplomacy, sports diplomacy has no barrier because sports are a universal phenomenon, transcending linguistic, national, and cultural boundaries. Like the objectives of traditional diplomacy, true sportsmanship promotes friendship, respect, and tolerance, among other universal values. Therefore, using sports as a tool of diplomacy is organic and valuable in creating opportunities for peaceful coexistence between nations.

There are many ways to use sports to promote diplomacy; however, the most common methods are hosting international sporting events such as the Olympics or the FIFA world cup and participating and succeeding in international events hosted by other countries. By hosting major sporting events on a regional or international level, nations can attract attention to their country, allowing them to put their culture on display and increase their global presence and influence.

Alternatively, states can participate in international sporting events, which can increase their exposure when their citizens perform well in events. Joining competitions can also show nations’ support of peace-building when they are willing to compete with adversaries, such as when North and South Korean or Palestinian and Israeli athletes gather together on the pitch, court, or track.

Is politics related to sports?

Local and national athletes and teams represent their hometowns and home countries. Many of us identify with an athlete or team in the same way we identify with a leader: we expect them to embody our values and sometimes our opinions. For, example, in June 2018, leading up to the World Cup, a friendly match was scheduled to take place in Jerusalem between Argentina and Israel.

However, after political pressure from Palestinians critical of Israel’s occupation and continued violence towards the Palestinian people, Argentina pulled out of the match. Not only does Argentina have one of the largest Arab diasporic populations in the world, but the Palestinian-Israeli conflict has been a polarizing issue about which people have very passionate points of view. Thus, the Argentinian national team ultimately decided to honor fans’ wishes, showing that sports diplomacy has its limitations, just like traditional diplomacy.

In July 2021, the Palestinian Football Association once again opposed a scheduled friendly match between Barcelona’s team and Beitar Jerusalem, an Israeli club whose openly-anti-Arab fans have contributed to the team’s racist reputation, at least until its new owner decided to address the situation – and to sell 50 percent of the club to a member of Abu Dhabi’s ruling family. Sports is one arena where Palestinian advocates have successfully confronted human rights concerns and seen results.

One of the biggest sticking points in the ongoing war of words between Turkey and Armenia is over Turkey’s refusal to acknowledge the Armenian Genocide that claimed around 1.5 million during World War I. In 2008, the two teams were set to play a World Cup qualifying match, and the Turkish president accepted an invitation from the Armenian president to watch together. In another gesture of goodwill, Armenia loosened visa restrictions so Turkish fans could come to the game in Armenia as well. The match opened new diplomatic channels between the two countries in hope to thaw relations going forward.

Sometimes our perceptions of a specific group of people and culture are skewed by our minimal direct interactions and by depictions in mass media. Therefore, many of us might accidently lapse into associating certain cultures with specific stereotypes. For the Middle East region, one of the most pervasive stereotypes concerns female oppression. Although it is true that many women across the region and the world face oppression, generalizations are unproductive. Shining a spotlight on sports has been a way to show that women in the Middle East regularly defy expectations. 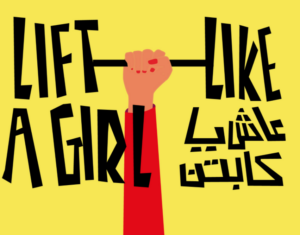 Egyptian filmmaker Mayye Zayed’s 2020 documentary film Lift Like a Girl portrays the lives and training regimens of award-winning female weightlifters in Egypt. The documentary shed light on the female, Arab and Muslim athletes, shattering stereotypes that girls and women in the region are weak and submissive. In this example, we can see the value of sports in public discourse as a tool for dismantling barriers and misconceptions.

So, who is responsible for sports diplomacy?

Although sports diplomacy is usually executed at a larger scale by a nation’s government, many actors can promote the concept, such as individual athletes and competitive or amateur teams. In addition, within the private sector, think tanks, NGOs, and other private initiatives can also play a supporting role in a government’s efforts and adapt sports diplomacy within their areas of expertise. You don’t have to be a diplomat to participate in this kind of diplomacy!

Where can sports diplomacy be implemented?

Sports are cross-cultural and transcend borders. As a result, sports diplomacy can happen anywhere and at any time. In addition to large sporting events, sports diplomacy can occur at educational institutions within sports exchange programs or through sports-focused workshops, which can be taught through both public and private-sector initiatives.

Why is this form of diplomacy beneficial?

Sports may not effect major geopolitical shifts, but they can foster dialogue on a person-to-person level, which, in turn, can transform perceptions and attitudes. Meeting, or competing with, people from countries that have been portrayed negatively by the media or government humanizes adversaries, opens opportunities for understanding, builds connection over common interests, and facilitates friendships.

For example, fifty years ago in 1971, a U.S. ping pong team was invited to China to play against a Chinese team; this tournament acted as a classic icebreaker of previously tense relations between the two countries.

A more recent example of sports diplomacy occurred when the Armenian and Turkish national soccer teams were set to face one another in a 2008 World Cup qualifying match. For over a hundred years, Armenians have pursued formal, international recognition of the 1915 ethnic cleansing and expulsion of over one million ethnic Armenians by Turkish Ottoman forces as genocide. Turkey has vigorously rejected the designation even as increasing numbers of states and multilateral organizations have acknowledged it. The denial by Turkey has fueled tensions between the neighboring countries, but in 2008, then-Turkish president Abdullah Gul accepted an invitation from his Armenian counterpart Serzh Sargsyan to watch the match together. Gul also loosened visa restrictions so that Turkish fans could attend the game in Yerevan. These gestures of goodwill, made possible through sports, helped unlock new diplomatic channels and negotiations, if not the border, which has been closed since 1993, between the two countries. In 2009, Sargsyan became the first Armenian head of state to travel to Turkey to attend a soccer game when the two countries’ national teams met once again in Bursa, Turkey. Sadly, the thaw in bilateral relations was temporary and the countries have yet to re-establish formal diplomatic ties.

Sports diplomacy also has spillover effects because of the positive effect of sports on health, making it the perfect complement to medical diplomacy, and its appeal to media, making it an impactful tool for public diplomacy. Thus, finding ways of increasing the use of this important diplomatic tool is worthwhile for multiple reasons!

Athletes knock the legs from under global sports governance

The Power of Sport as Public Diplomacy

Sports Diplomacy as a Key Tool in U.S. Foreign Policy