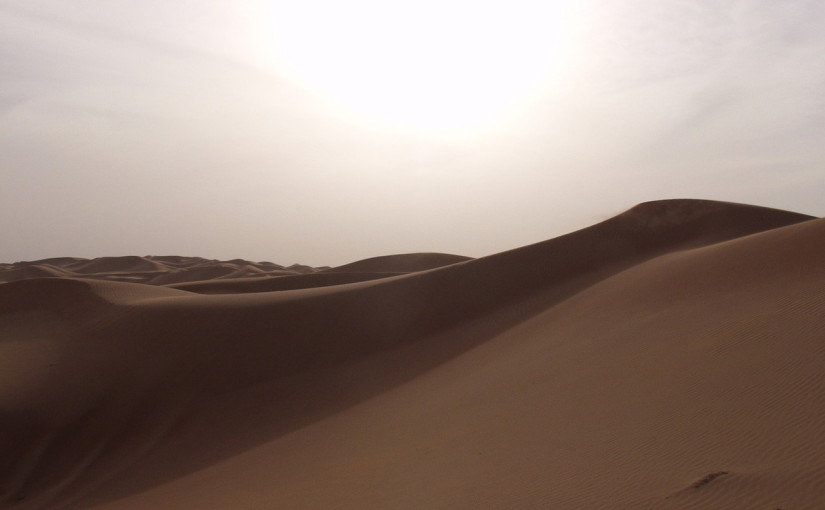 The Kurds and Kurdistan

The Kurdish populations of Iraq, Turkey, Iran, Syria, and adjacent areas of Azerbaijan occupy a mostly highland area known historically as Kurdistan. In looking at the Kurdish populations, we see the politics of identity, religious and tribal sources of leadership, and a long history of foreign intervention and manipulation, all contributing to ongoing contention and conflict. But we also see forces at work that are transforming Middle Eastern societies in general, such as national and international labor migration, and economic and social division based on differential access to education and resources.
The Kurds were invited to the company of nation-states at the end of World War I, but never actually got through the door. In the end, the objectives of the Great Powers and the concerns of Turkey and Iran precluded statehood. The only modern Kurdish state was the short-lived Mahabad Republic, established by the Soviets during their brief post-World War II occupation of portions of Iran. While there has never been a unified Kurdish state, Kurdistan itself is also home to often sizable populations of Turks, Arabs, Persians, Lurs, and Türkmen–not to mention Armenians, whose nationalist aspirations would clash territorially with those of the Kurds. Eastern Turkey and the high plateau north of Lake Van were historically densely settled by Armenians, with Kurdish penetration relatively recent. A long history of warfare between the Persian and Ottoman empires established the present Iranian frontiers with Turkey and Iraq, while the post-World War I occupation by British forces in order to control the oil fields of Mosul and Kirkuk created the present-day Turkey-Iraq border. Since 1950, there has been large-scale migration of Kurds in Turkey, in particular to the western provinces and abroad. Approximately 750,000 Kurds live in Europe, particularly in Germany–a number augmented monthly by continued illegal migration as well as by asylum seekers. Today, the largest concentration of urban-dwelling Kurds is in Istanbul.

The region, apart from oil fields firmly under Iraqi control, has few natural resources with which to sustain development, and most outside observers would agree that rather than “exploiting” them, the nation-states in question subsidize their Kurdish regions in order to retain political control and to limit migration (Mango, 1993, p. 736). Population estimates are unreliable, but commonly used extrapolations put 10 million Kurds in Turkey, 5 million in Iran, 4 million in Iraq, 1 million in the successor states of the former USSR, and 500,000 in Syria. Kurdish is a language grouping within the Iranian family of languages and contains three main groups of dialects, Kurmanji, Sorani, and, most close to Persian, Kermanshahi. In addition, there are two smaller dialect groupings, Zaza and Gurani. Iranian Kurds of Kermanshah are mostly Shi’a, those in Turkey are Sunni, with the Zaza speakers being mostly Alevi. This linguistic and religious differentiation has been itself an obstacle to political unity and a common discourse.

While there are no uniquely or inherently Kurdish features of social organization, certain patterns stand out. The best recent anthropological source for understanding Kurdish rural society is Martin van Bruinessen (1992) . He describes the tenacious survival of old loyalties, even where they come to carry new social meaning, such as in political parties and factionalism, and enduring traditional patterns of leadership in the form of tribal aghas (aga in Turkish), usually possessing wealth in land and herds, sheikhs or religious leaders and local saints and mystics, and the families and retainers of these leaders (see Chapter 3). Even the spread of nationalism, van Bruinessen suggests, had as much to do with positions adopted by such traditional tribal leaders as Mulla Mustafa Barzani as with nationalist or Marxist ideology. Often, too, even nontribal rural-dwelling Kurds are closely associated with tribal landowners who act as patrons. Political parties in Turkey, for example, whether or not specifically associated with Kurdish identity, vie for votes in the southeast by negotiating with these traditional leaders.

Van Bruinessen describes how Kurdish national identity developed apace with other nationalisms in the late Ottoman period, and how by the end of World War II there were efforts at national autonomy underway in every country with a Kurdish population, although these populations were by no means speaking with one voice. One very prominent revolt against the Kemalist government of Turkey that still has political echoes is the February 1925 revolt led by a charismatic sheikh of the Naqshbandi order, or tariqa, Sheikh Said. He fused a religious appeal with nationalistic sentiment and his followers briefly controlled a number of administrative centers before being suppressed. Also related to the Naqshbandi is the Nurcu Movement founded by another sheikh, Nur Said. His writings, mostly from the 1920s, remain very popular among Kurds and others, even though by the end of his life he had rejected nationalism, per se, in favor of a modern or reformist Islamic synthesis. It is said that this was the basis for the Fethullah Gülen Community Movement, which attracts adherents from all ethnic communities, and which we described in Chapter 3.

It is beyond the scope of this book to review the complex history of the rise of Kurdish national identity and the many political forms it has taken in different countries. At the moment, the conflict in Turkey is second only to the Palestinian question as a source of instability and violence. Since 1985, when the PKK, or Kurdish Workers Party (Partiya Karkeren Kurdistan), began a campaign of violence, over 30,000 lives have been lost (20,000 of them Kurdish militants), not to mention a financial drain estimated to be 10 percent of Turkey’s annual GNP. Additional costs include lost regional infrastructure and returns on investment, near total stagnation in the livestock industry, and the long-term cost to Turkey of the alienation of an important segment of its citizenry.

While the conflict has many dimensions, including contradictory visions of the future held by different segments of the Kurdish population, its origins lie in the formation of the Turkish republic itself out of the debris of the empire. The last years of empire and the subsequent struggle for independence in the face of an invasion by Greece had resulted in massive population dislocations throughout Anatolia and interconfessional strife, and had pitted competing nationalisms against each other. Against this backdrop, it is not surprising that one principle adopted by the emergent state was that Turkey was a monocultural entity, at least insofar as its Muslim populations were concerned. Greeks, Jews, and Armenians were permitted to retain their own schools and other institutions, 10 but Muslims of whatever linguistic, sectarian, or ethnic background were asserted to be of “Turkish nationality.”

This national vision was entirely consistent with the prevailing nationalisms of the day and with other successor regimes of the Balkans and Greece. While this may have simplified the task of early nation-building, it has contributed to a sense of resentment and political alienation among the large Kurdish minority that has grown apace with the integration and development of the nation. The cultural diffusion of national emblems, media, and expressive culture has made many aware of what was being suppressed. Also, nationalist efforts by the Kurds of Iraq and Iran have influenced Kurdish intellectuals in Turkey. It is not that Kurds in Turkey face racial or ethnic stigmatizing and consequent social discrimination, as, for example, do Roma or Gypsies, rather their cultural heritage is suppressed or appropriated.

While the PKK, in spite of its claims, never spoke for more than a minority of Kurds, it was successful in tapping into a very widespread font of resentment (Mango, 1993, 1995; Barkey&Fuller, 1999; de Bellaigue, 1999) . The often brutal military and administrative moves to suppress it served to amplify its mystique and appeal beyond the relatively localized areas in which it operated. Most of the Kurdish population is now dispersed throughout the country, and the earlier objectives of the PKK for an independent (but impoverished) Kurdistan have little resonance. Since the capture, trial, and conviction of PKK leader and founder Abdullah Öcalan, in 1999, the conflict may be entering a new phase, one that focuses more on cultural and political rights, per se. The fact that many prominent Turkish politicians (about 25 percent of the current parliament), business leaders, and entertainers claim Kurdish descent, as well as the fact that territorial secession is a goal of only a tiny minority, give some hope that a transition to a culturally more inclusive society may be possible. But this would entail a significant policy reformulation, one in which Kurdish language media and culture could flourish and political parties directly address issues of Kurdish concern without fear of being banned.

One Response to “The Kurds and Kurdistan”