Completion of the pilgrimage to Mecca during the prescribed month (Dhu’l Hijjah, or Hajj Month) is an obligation for all able-bodied Muslims around the world at least once in their lifetime, if they can afford to do so. Since the Muslim calendar is lunar and the lunar year of twelve months has 354 days, the hajj takes place eleven days earlier each year on the solar calendar.

In today’s world, the hajj is a massive human event and a logistical effort of enormous proportions, carried out by the Ministry of Hajj, part of the government of Saudi Arabia. Approximately 2 millions participate in the hajj each year; over 1.75 million Muslims come to Saudi Arabia from outside the country, joined by several hundred thousand more pilgrims from within the country – but the actual number of participants may be even higher than estimated. All of these pilgrims must be housed and fed, and have access to medical, communication and sanitation facilities.

On occasion, the volume of pilgrims trying to fulfill the various ritual obligations of the hajj has led to accidents, from trampling of some pilgrims to collapse of tunnels and other infrastructure. Some modifications have been made to the hajj procedures in order to help reduce such incidents, such as the recent renovation of the bridges to the jamraat, or pillars of the devil, and the new practice of handing out prepackaged packets of pebbles for the stoning of the devil ritual so that pilgrims do not need to search for small stones on the ground in the foothills.

The logistical issues of the hajj have also lent themselves to extraordinary architectural solutions. The Great Mosque complex has been expanded to accommodate more pilgrims, and the hajj terminal at the King Abdulaziz International Airport in Jeddah has won architectural awards for meeting the challenge of accommodating the huge numbers of hajjis in an innovative and culturally appropriate way. The enormous terminal, used only for a short time each year, takes the form of a traditional hajj tent to new heights with enormous, well-ventilated open spaces.

Pilgrims must put on special clothing for the hajj (two white unsewn sheets for men and modest clothing for women, with no face veils) and enter a state of ritual purity (ihram) at entry points (miqat) located a certain distance from the sanctuary in Mecca. While in this state of Hajj purity, they may not cut their nails or hair or have sexual relations. Pilgrims specifically express their intention to perform hajj, as intent is a crucial concept in Islamic ritual and law. Pilgrims also recite the following: 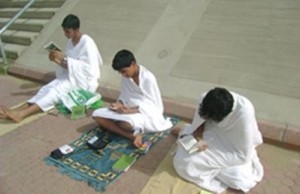 There are three forms of the hajj that pilgrims may perform. The most preferred is hajj al-tamattu’, in which the pilgrim performs the umrah (the circumambulation of the Ka’aba) and the sa’y (more information below) and then comes out of the state of ihram. The pilgrim then re-enters a state of ihram in order to fulfill his intention to perform the rites of the hajj. In hajj al-qiran, the rituals of umrah form part of the hajj and are performed under one continuous ihram. In hajj al-ifrad, the pilgrim performs hajj only and does not perform umrah. Below we will describe hajj al-tamattu’, which is the form of hajj that most pilgrims from abroad perform. 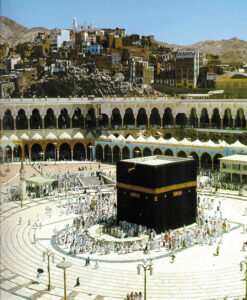 Pilgrims first go to the Great Mosque in Mecca, built around the Ka’aba. The Ka’aba, with the Black Stone embedded in its side, is the building in the center of the mosque which Abraham and his son Ishmael are said to have built after the interrupted sacrifice of Ismail (Ishmael) by his father. Here, pilgrims circumambulate the Ka’aba seven times counterclockwise.

Pilgrims must then walk and run seven times back and forth between the two small hills of Safa (about 200 yards from the Ka’aba) and Marwah (about 150 yards from the Ka’aba) commemorating Hagar’s frantic search in the desert for water and refuge for her baby, Ishmael. Hagar, in Islamic tradition, is Abraham’s second wife. The two hillocks are now incorporated into the mosque complex itself, with a three-story corridor running between them to accommodate the pilgrims. 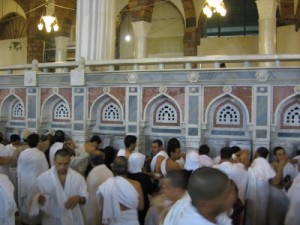 Although it is not a required part of the hajj rites, most pilgrims drink water from the well of Zamzam, located inside the mosque complex about 60 meters east of the Ka’aba. Muslims believe God caused this spring to well up in answer to the thirst of Hagar and her baby, Ishmael, when they were wandering in the desert. Pilgrims can also buy bottles of zamzam water to bring home as a special gift for family and friends.

On the same day, pilgrims leave the Great Mosque compound and travel about five miles to the east to the plain of Mina. The plain is covered with an enormous tent city to house the pilgrims. Here pilgrims engage in prayer and contemplation from the noon prayer on the 8th of Dhu’l-Hijjah to the dawn prayer on the 9th.

The next day, after performing the dawn (fajr) prayer at Mina, pilgrims leave for the Plain of Arafat, a further five miles to the east.

When the pilgrims reach the Plain of Arafat, they perform wuquf, or the day of standing. On this day, perhaps the spiritual high point of the hajj, the pilgrims stand outside and face toward the qibla in Mecca and pray intently for much of the day. Pilgrims seek pardon for their sins and renew their faith. This is also the location of the Mount of Mercy, a hill where Muhammad gave his farewell sermon the last time he performed the hajj.

After sunset, the pilgrims leave the Plain of Arafat and move back toward Mina, stopping at Muzdalifah, a plain between Arafat and Mina. Here, pilgrims spend the night of the 9th of Dhu’l-Hijjah in prayer, meditation, rest and talk with their fellow pilgrims in the open air. Some also collect pebbles from the ground to throw at the jamaraat pillars the following day.

At dawn on the 10th day of Dhu’l-Hijjah all two million plus pilgrims move back to Mina for the beginning of the Eid al-Adha, the Festival of the Sacrifice. This multi-day holiday is celebrated by Muslims everywhere around the world.

On arrival at Mina, the pilgrims throw seven stones at the largest of three pillars (jamraat), which stand in the center of the plain and which represent the devil. Throwing stones at the pillars symbolizes defying temptation and warding off evil. This is also one of the most dangerous parts of the pilgrimage, since all two million pilgrims must pass close enough to the pillars to toss their pebbles. Groups of pilgrims are scheduled very carefully so that everyone can pass by the pillar and throw their pebbles as safely as possible-even so, the crush of people can be extremely hazardous, so the elderly, weak and ill can nominate others to throw their stones for them.

Muslims everywhere, including pilgrims, now sacrifice an animal in emulation of Abraham’s sacrifice, with one third of the meat to be consumed by the family, one third to be shared with friends, and one third to be distributed to the poor. In the past, pilgrims on hajj sacrificed actual animals in Mecca, where much of the meat could not be distributed to family, friends and the poor for logistical reasons, and thus was wasted. Today many pilgrims from far away can buy coupons to subsidize the sacrifice and distribution of meat to the poor in their home countries, fulfilling both piety and practicality.

Pilgrims now return to the Great Mosque in Mecca to again circumnavigate the Ka’aba seven times and again walk/run between Safa and Marwah seven times. This is called tawaaf al-ifadhah and it is is a critical part of the hajj.

The pilgrim then takes off the ihram garb and can put on normal clothes again, and gets his head shaved (or her hair cut).  The other ihram restrictions are also ended. The pilgrims return to Mina to spend the night.

Pilgrims stay at Mina for two or three additional days if possible. Each day, they perform the ritual stoning of the pillars at Mina, tossing seven pebbles at each one of the three pillars representing the devil.

After the last stoning, before leaving the vicinity of Mecca, the pilgrims perform a final “farewell” tawaaf or circumambulation of the Ka’aba. This farewell tawaaf is not followed by the sa’y, the walk between Safa and Marwah. This concludes the hajj rituals.

While visiting the Mosque of the Prophet in Medina is not a part of the canonical hajj rituals, most pilgrims also visit this mosque, located a few hundred miles from Mecca. Muslims do not worship Muhammad, but he is seen as the best exemplar of good Muslim behavior, and is honored by Muslims everywhere.

Muhammad and his followers left Mecca and made their homes in Medina when the message he brought was rejected by the elite of Mecca. The fact that this migration, called the hijra, marks the beginning of the Muslim calendar points to the importance of Medina in the founding of the early Muslim community.

Visitors to Medina not only visit the Prophet’s Mosque, where Muhammad made his home and which also houses his tomb under an enormous green dome, but also other sites important in the early history of Islam, including the graveyard for those who fell in the battle of Uhud.

The PBS website for the film Muhammad: Legacy of a Prophet includes a “virtual hajj” with maps and explanations of the hajj. It includes a video clip on the introductory page that can give students a good idea of the sheer numbers of pilgrims engaged in hajj.

This article is a conversation with retired foreign service officer Dr. David Lang from the Saudi-U.S. Relations Information Service on the pilgrimage, called The Hajj in Perspective. It discusses not only the ritual aspects of the hajj, but the logistical and political dimensions as well.

The Saudi Arabian Ministry of Hajj has its own website which helps to convey the amount of coordination and planning that goes into hosting the hajj pilgrims each year. Take a look at the site to gain some perspective on this huge operation.

The Huffington Post: Witness Mecca’s Dramatic Transformation over the Past Century

This article introduces the controversy surrounding updates to the area in order to accommodate the growing number of pilgrims each year. What do you think of sacrificing important sites and landmarks in order to expand the complex in Mecca? The photojournalism piece shares a collection of historical and contemporary photos that demonstrate how the city has evolved over time.