Although members of the LGBTQ+ community face threats of and frequently experience violence and discrimination across the Middle East, there are a number of notable Pride celebrations that take place in the region honoring the history, resilience, accomplishments and adversities of the population. Activists and human rights organizations in several countries have been fighting for equality and providing safe spaces, services and support to marginalized people through grassroots efforts, educational campaigns, social networks, and public celebrations. Below we  highlight a few prominent Pride celebrations. To learn more about some of the organizations supporting gay, lesbian, bisexual, trans and queer people in the Middle East, visit our Instagram to view a recent series highlighting their vital work.

Tel Aviv boasts the Middle East’s largest Pride event, as well as the largest Pride event in continental Asia. This year, LGBTQ+ Israelis will take to the streets on June 25, a year after the coronavirus pandemic forced the celebrations to be put on hold. In previous years, as many as  250,000 Israelis and tourists participated in the parade at the end of June, which is a culmination of a month of events celebrating diversity and equality.

The LGBTQ+ community has been visible in Israel for decades and is the only such community in the Middle East to enjoy significant legal protections. The first Pride event in Israel was a protest in Rabin Square in 1979, and the movement grew as the Israeli government repealed its anti-sodomy law in 1988 and subsequently passed an anti-discrimination law that protected LGBTQ+ Israelis in the workplace in 1992. One year later, the first Tel Aviv Pride march occurred, and the event has evolved into a month-long celebration that includes TLVfest, an international gay film festival; tributes to Israeli LGBTQ+ historical figures; and a host of other LGBTQ+ events.

Bonus fact: The word for pride in Hebrew is “ge’eh,” which was absorbed into the Hebrew vernacular because it sounds close to the English “gay” and is thus used in LGBTQ+ related terms. 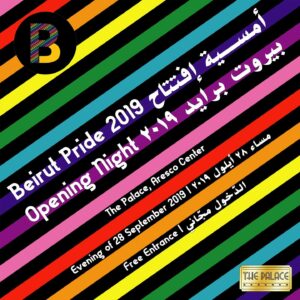 Beirut hosted its first Pride event in 2017, and it remains the only celebration of its type in the Arab world. Still in its beginning stages, Pride in Beirut is not a month of sprawling street celebrations. Instead, the goals of the organizers and participants are political: marches aim at decriminalization of homosexuality and making visible the challenges that LGBTQ+ Lebanese experience every day. According to the organizers of Beirut Pride, members of the LGBTQ+ community are subjected to social marginalization and the fear of being “arbitrarily detained for a simple suspicion of homosexual behavior.”

In 2018, event organizer Hadi Damien was arrested and forced to suspend events or face prosecution. The 2019 Pride program included concerts, health workshops and conferences celebrating the LGBTQ+ community but some of the public events were forcibly cancelled  due to pressure by influential religious leaders who decried them as promoting same-sex marriage, and by association, debauchery and immorality. Over 4,000 people participated in the Pride march. The event was cancelled in 2020 due to the coronavirus pandemic, but it is scheduled to return in September 2021. The program is organized by Beirut Pride, which takes a “collaborative, positive stance against hate and discrimination based on gender and sexual diversity.”

Unlike in Israel, the Lebanese LGBTQ+ community does not benefit from broad legal protections; nonetheless, there have been some gains: in 2018, a district court of appeal in Lebanon issued a groundbreaking ruling that consensual sex between people of the same sex is not unlawful. People still face police harassment and arrest for being – or simply being perceived as – gay, but there is increasing support for a repeal of Article 534 of the Lebanese Penal Code, which punishes “any sexual intercourse contrary to the order of nature” with up to one year in prison. The law was  put in place by the French mandate in the early 1900s.

In Istanbul, Pride first took place in 2003 and has occurred every year on either the last Sunday of June or the first Sunday of July, to mark the end of Istanbul pride week. In 2013, over 100,000 people attended the Pride parade. Authorities have regularly banned the celebration since 2014, leading to frequent arrests when organizers and participants march in spite of public orders. In 2019, over a dozen people were arrested, consisting primarily of university students; they face up to three years in prison. on charges of participating in an unlawful assembly and failing to disperse when ordered to do so.

A court lifted the ban and allowed the 2019 events to take place. Still, police ignored the ruling and responded violently to those in attendance. Despite this blanket ban for 7 years, 2019 was the 17th year Turkey had held pride events. Like most places, the pandemic put Pride on hold in 2020 but Istanbul Pride organizers were undeterred and resurfaced in 2021 with Pride Week. Police once again used force to disperse small parades and gatherings in Istanbul and across the country. In advance of the parade in Taksim Square, organizers released a press statement in defiance of state oppression, announcing the LGBTQ community and its allies would continue filling the streets and fighting hatred and marginalization of vulnerable groups, including women, sex workers and the Kurds.