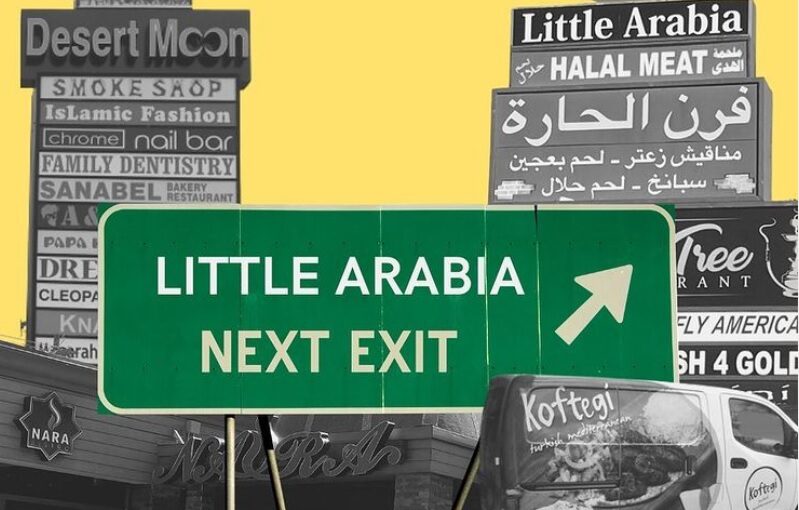 These are but a few of many of the Arab-American communities across the United States built around common bonds of language, food, culture, national origin and religion. What do you know about the people of Middle-Eastern descent in your town or city?

Dearborn, Michigan, is a city in Metropolitan Detroit that boasts the largest per capita population of Arab Americans in the United States. Around 40,000 Arab residents of diverse backgrounds call Dearborn home, while more than 300,000 reside in the greater Detroit area. Beginning in the early 1900’s, Lebanese Christians immigrated to Dearborn and found work in the booming auto industry. Lebanese Americans are the largest group of Arab Americans both in the United States and the Detroit area. In the past decades, a growing number of Muslim Arabs have immigrated to Dearborn from conflict zones, such as groups of Yemeni and Iraqi immigrants.

As a center of Arab heritage, Dearborn holds many cultural sites and events that reflect the city’s immigrant groups. The Islamic Center of America was the first Shi’a mosque in the United States, originally constructed in 1963, and became the largest mosque in North America after the center’s current mosque opened in 2005. Also located in Dearborn is the Arab American National Museum, which is the first and only museum in the world dedicated to telling the Arab American experience. The city held the annual Arab International Festival from 1995 to 2012, and local officials hope to revive it after the COVID-19 pandemic.

On the West Coast, a similar Arab-American community has flourished. “Little Arabia” in Orange County, California, is home to 24,000 residents of Arab descent, and is sometimes called “Little Gaza” due to the area’s original name, Garza Island.

After a bout of depopulation in the area in the 1980s, the Arab population in Little Arabia began to grow significantly throughout the next decade as immigrants came from Syria, Palestine, Egypt, and Lebanon. Local Arab American businessmen began buying distressed houses and selling them to the new immigrants as they arrived from those countries, helping centralize the population into the ethnic enclave that it has become.

The residents of Little Arabia have been leading a push since 2010 to gain official designation from the City of Anaheim, in addition to partnership with the city to improve signage and building facades. Many Arab-owned businesses thrive in the neighborhood, among them are dozens of restaurants, bakeries, jewelry stores, travel agencies, and hookah cafes. Arab immigrants have also founded four mosques and two churches in the area.

Columbus, Ohio, is home to a thriving Somali-American community that numbers around 60,000—the second largest concentration of Somali-Americans in the United States. Many members of this community immigrated to cities throughout the Midwest after the Somali Civil War began in 1991. Today, there are more than 500 Somali-owned businesses in Greater Columbus. A significant local support network has developed to help the immigrants, most of whom came to Columbus as refugees. The Somalia Community Association of Ohio aids the population with English language programs, legal advocacy, and securing housing and employment.

Somali residents of Columbus have gained increased visibility in the city in recent years. Starting in 2017, though suspended due to the COVID-19 pandemic, Columbus held the Somali Culture Festival, which was designed to “celebrate the uniqueness of Somali culture through its food, art, and history.” Local Somali restaurants, clothing stores, and other specialty stores have booths at the festival, and traditional Somali dances are performed.

Somalia is a member state of the Arab League, and the Somali language, though distinct from Arabic, has been heavily influenced by Arabic. Due to the shared history of Somalis and Arabs, Somalia is widely considered to be part of the Arab world.