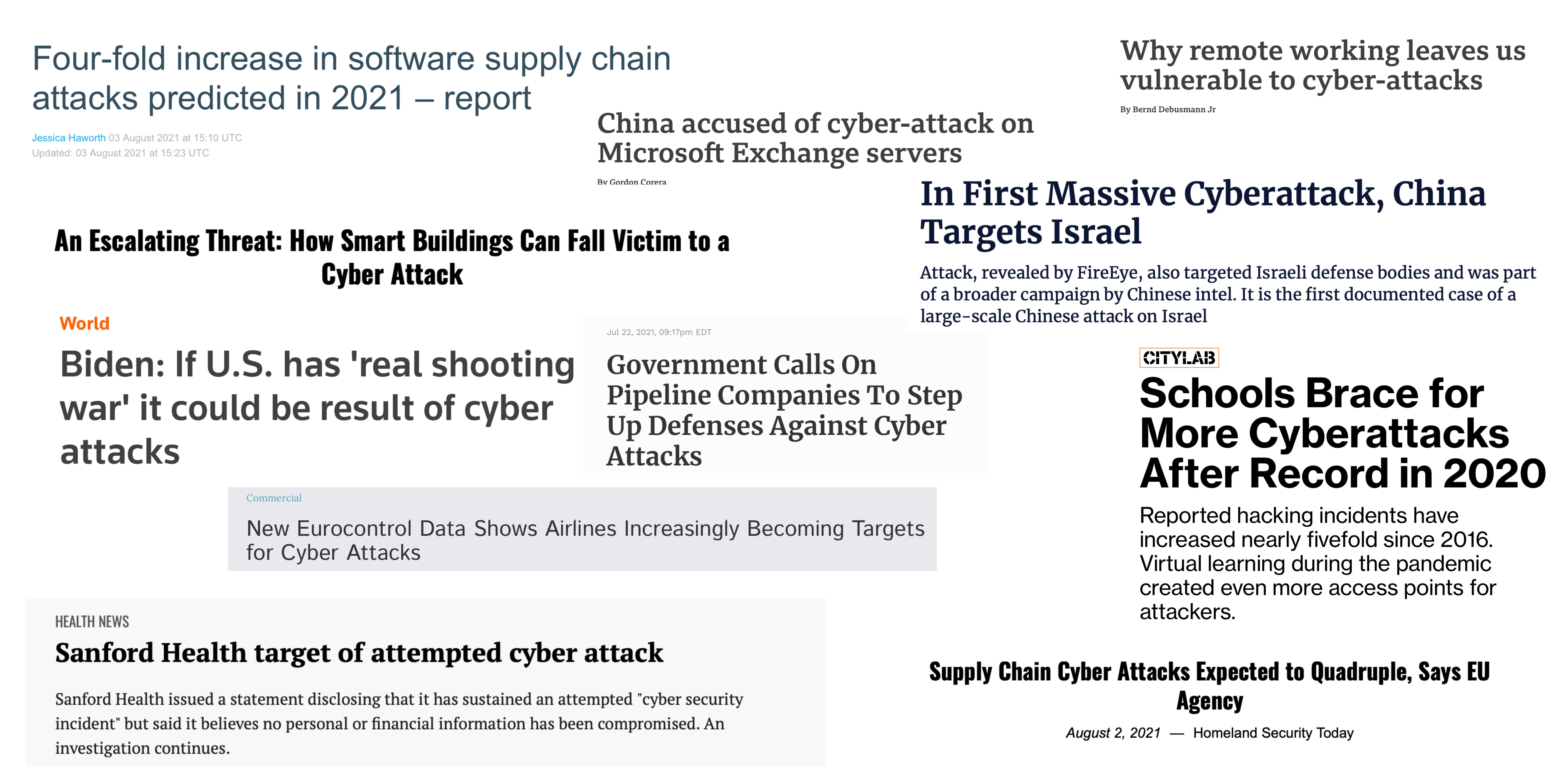 As technology advances on a global scale, cybersecurity is becoming an increasingly pressing topic on both the domestic and international levels. The Center for Strategic and International Studies noted eleven significant cyber incidents in just the month of May in 2021. The incidents included ransomware attacks on the world’s largest meat processing company, JBS, and the United States’ Colonial Pipeline. While ransomware makes up a substantial portion of recent cyber incidents, issues such as data theft and the targeting of critical infrastructure are also both significant threats.

Cybersecurity is defined by the U.S. Cybersecurity & Infrastructure Security Agency as “the art of protecting networks, devices, and data from unauthorized access or criminal use and the practice of ensuring confidentiality, integrity, and availability of information.” Cyberattacks are “attacks via cyberspace that target an enterprise’s use of cyberspace for the purpose of disrupting, disabling, destroying, or maliciously controlling a computing environment/infrastructure; or destroying the integrity of the data or stealing controlled information.” Ransomware is a particularly prevalent type of cyberattack that uses malware to block the use of a computer system until a certain amount of money is paid. As a growing amount of information and actions by governments and other entities transition online, cybersecurity becomes more important, and cyberattacks become more likely.

Citizens and governments alike rely on the internet, and in many cases, a country’s stability depends on the stability and security of its internet infrastructure. As such, cyberattacks can be detrimental to a country’s international relations, economics, security, and diplomacy. For example, in February 2021, Russian hackers attacked the Ukrainian government’s file-sharing system and attempted to distribute documents through a program that would install malware on computers that downloaded the files. In another incident in May 2021, a North Korean hacking group targeted high-profile South Korean government officials in a cyber espionage campaign.

When a government is the target of a cyberattack, the results can include heightened tensions between that country and its attacker and  the risk of  vital information falling into the hands of those who can use it to damage the country, its citizens, or its infrastructure. Similarly, when a company is a victim of a cyberattack, it not only harms the company itself in terms of lost revenue, but it can cause issues in the supply chain, affecting a multitude of countries and other companies. A study by Gemalto found that out of 10,000 individuals, 70% said they would stop doing business with a company that experienced a data breach. Cyberattacks can lessen a consumer’s trust in a company and, likewise, can also reduce a citizen’s confidence in their government’s ability to defend itself against such attacks in the future.

The Middle East and North Africa (MENA) region is no exception to the dangers of cyberattacks. In 2020, the United Arab Emirates faced a 183% increase in cyberattacks, and many other countries also faced increased levels of cyberattacks. Among the top threats to the MENA region’s cybersecurity are ransomware and Denial of Service Attacks (DDoS). A DDoS attack is a cyberattack that attempts to make a machine or network unavailable by overwhelming it with fake traffic. VPN attacks are also an area of weakness for the region, especially since more individuals work remotely as a result of the pandemic. Across the MENA region, government agencies, banking and financial systems, healthcare, education, and the workforce are all hurt by cyberattacks.

Many cybersecurity issues that the MENA region faces are similar to those experienced by other countries. As companies, organizations, and governments struggle to return to in-person operations, and governments continue to store large amounts of data online, cybersecurity will undoubtedly continue to be an important topic. In order to move into a more cyber-secure future, countries must take steps to advance the security and monitoring of their networks and cyber services.

Specifically, governments can initiate dialogue with companies, government agencies, and individuals about what they can do to avoid and defend against cyberattacks. Although many are aware of the threat of cyberattacks and other breaches of cybersecurity, few know how to respond to them. Maintaining transparency about cyber-related issues and continuing to research security measures will be vital. For many countries, creating a national cybersecurity strategy is necessary. While companies and governments alike can become more efficient and successful through the use of technology, it will also be crucial to attend to the new challenges and threats that come with it.