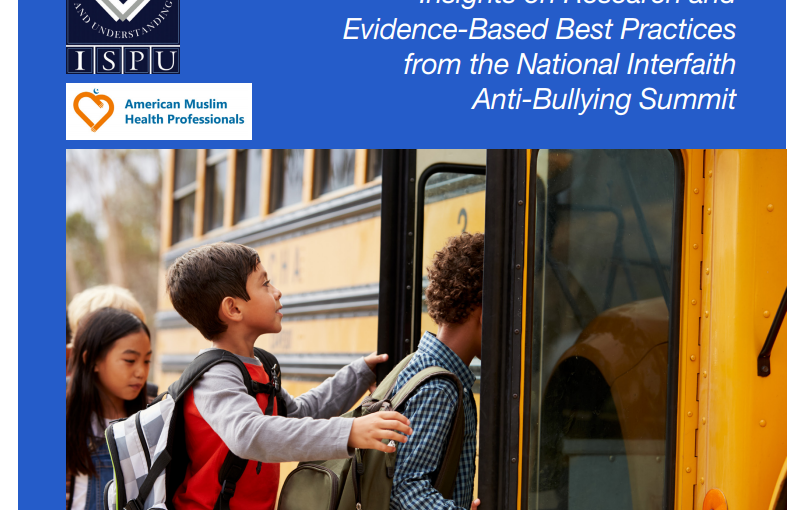 The following is drawn from research conducted by the Institute for Social Policy and Understanding (ISPU) as well as a report on the 2017 National Interfaith Anti-Bullying Summit, in which ISPU played a significant role on the topic. You can access the complete report at the link for insightful evidence-based best practices.

In a 2017 study conducted by ISPU on a nationally representative sample of American families, 42% of Muslims, 23% of Jews, and 6% of Catholics reported that at least one of their children had been bullied in the past year because of their religion.[i] Importantly, in 25% of the cases involving Muslim students, a teacher or administrator at school perpetrated the bullying.[ii]

Like other social institutions, schools “mirror larger forces of exclusion and inequality in society, often reflecting dominant notions of who does and does not belong.”[iii] Since harassment, intimidation and bullying (HIB) in schools is a reflection of the larger sociopolitical climate,[iv] and because the U.S. Department of Education statistics do not breakdown bullying based on religious affiliation, it is important to examine other sources of data.

According to the 2018 ISPU poll, 61% of Muslim participants reported experiencing religious-based discrimination. This number is in stark comparison to other religious groups, with 48% of Jews, 21% of Protestants, and 19% of Catholics reporting discrimination based on faith affiliation.[v] In a similar vein, it is helpful to examine the most recently available FBI hate crimes statistics from 2016:[vi]

Other research also supports the high prevalence rate of peer victimization among Muslim youth. A report by the Council on American Islamic Relations (CAIR) found that 50% of their sample of California Muslims aged 11-18 reported being called mean names about their religion.[vii]

Given the prevalence rates and negative mental health outcomes associated with religious-based bullying, it must be considered a public health issue in need of prevention and intervention attention. Schools should represent safe environments where children grow and learn free of abuse.[viii] Although every child deserves this, many schools have failed to protect children from the abuse perpetrated by peers or worse — and on rare occasion — at the hands of their teachers or administrators. According to the U.S. Department of Education, in 2015, 1% of 12-18 year olds reported being the target of religious-based hateful speech while on school grounds.[ix] While such a low percentage may not mobilize communities into action, this number vastly underestimates the prevalence rates of HIB. This underestimation is due to inadequate reporting mechanisms, lack of training in schools on what constitutes bullying, and failure to report due to fear of retaliation or the belief that adults in school will do nothing to address the incident. As such, bias and bullying incidents involving religious-minority students is a subject that has received little attention from researchers and even less in terms of prevention and intervention programming.

Bullying inherently involves an imbalance of power. Kids who bully use their power — such as physical strength, access to embarrassing information, or popularity — to control, alienate or harm others. Power imbalances can change over time and in different situations, even if they involve the same people. Forms of bullying —  teasing, name-calling, taunting, threatening, leaving someone out on purpose, spreading rumors about someone, hitting or tripping someone, or harming his or her belongings — are quite familiar to most anyone but sometimes it can be more nuanced and complicated.

Religious-based bullying is a multilayered issue particularly as it relates to the intersection of religion, ethnicity, race, and ancestry. The conflation of skin color and religion enables a perception of individuals of color to be considered as “other,” as “enemy,” and as “terrorist.” Consequently, hate crimes and bias-based bullying become more acceptable when the individual is considered an outsider who possesses anti-American views; the escalation of hate crimes after terrorist activities supports this position.

What Is the Impact of Religious-Based Bullying?

Since a sizeable number of young people experience religious-based bullying, it is critical to know what outcomes might be expected for targets of bullying. One study found that youth who were harassed due to a minority group affiliation reported higher levels of mental health issues and substance use compared to those who were targets of non-biased-based harassment.[x]

Consequences associated with being bullying include: anxiety and depression[xi]; compromised peer relationships[xii]; academic disengagement[xiii]; and risk of suicidal thoughts.[xiv] Bias-based bullying has been shown to be more harmful than other forms of bullying. One study found that youth who were harassed due to a minority group affiliation reported higher levels of mental health issues and substance use compared to those who were targets of non-biased-based harassment.[xv]

Other evidence suggests that even frequent “minor” experiences of microaggression related to minority status are associated with poor mental health outcomes since the attacks are perceived to be due to an integral part of one’s identity and are expected to occur again.[xvi] Since many religious followers wear visible religious symbols (e.g., the Muslim hijab, the Sikh dastaar as well as chunni or dupatta, and the Jewish yarmulke, to name a few), the target of the attack often anticipates future incidents.[xvii] Adopting a developmental perspective is particularly salient when considering bullying, brain development, and well-being.

Inclusion and equity are fundamental tenets of a positive school climate. Structural barriers to religious practice and expression in schools and extracurricular activities convey messages about who “is important” and who “is not important.” To be inclusive, schools must be sensitive to the beliefs and needs of all students. School administrators and teachers may be unaware of issues related to important religious practices that can affect students’ day-to-day experience; for example, with regards to Muslim students, how does fasting during Ramadan have an impact on test performance or other school-related activities? Are there designated prayer areas? Are halal foods available in the cafeteria? These seemingly small matters can lead to feelings of social isolation and a sense of not belonging to the school community.

What Can Be Done to Remedy the Problem?

Inclusion and a commitment to equity are qualities that schools must espouse through what they teach, how they teach it, and how this shapes the interactions they have with all members of the school community. The summit presentations yielded valuable insights for educators, parents, and students, as well as the broader community.

The above information is extracted from the report, “Religious-Based Bullying: Insights on Research and Evidence-Based Best Practices from the National Interfaith Anti-Bullying Summit,” which can be read in its entirety here.

You can also view the December 5, 2018 panel discussion of the ISPU and AMHP’s Religious-Based Bullying report, the connection between mental health and bullying, and parent/child accounts of religious-based bullying.