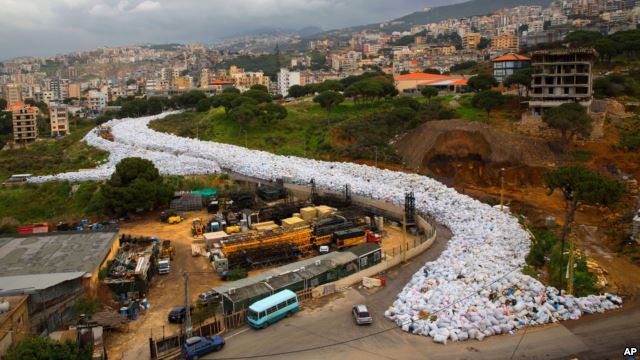 While the damaging effects of the Islamic State and sectarian tensions tend to dominate headlines about the Middle East, smaller crises and developments are overlooked. What results is a very limited perspective that can reduce this diverse area to a no man’s land of brutal terrorists, endless bombs, and multitudes of uprooted civilians weaving their way to safer destinations. From time to time, TeachMideast will present stories that reorient the narrative of the region and encourage people to think more deeply and critically about this massive geographical area whose people and governments represent vastly different interests and challenges. In so doing, educators can help young people develop a more nuanced understanding of people, politics, and society, in general, and of the Middle East in particular. This essay is followed by multi-media materials, teaching tools, further resources and discussion prompts.

Since July 2015, Lebanon has been embroiled in a garbage crisis. Other states are engaged in protracted conflicts that have resulted in extensive death and displacement, but in Beirut, the “Paris of the Middle East”, local communities are enduring an extreme public health and sanitation disaster as a result of Lebanon’s dysfunctional government. The debacle was precipitated when authorities closed the primary landfill for Beirut and the surrounding governorate without putting an alternate mechanism in place to handle the basic service of trash collection. With nowhere to take the trash, workers stopped picking it up and massive piles of garbage began to consume public places. Figurative rivers of garbage now snake through the city.

Fed up with what they saw as yet another symbol of a perpetually broken government that has also failed to maintain other services such as water, electricity, and drainage, thousands of Lebanese took their discontent to the streets of Beirut with angry demonstrations. Though the protests prompted political debates, voices on both sides of this impasse have grown quiet, and, eight months later, the problem persists. The trash has been moved to the periphery of the city and on the banks of the Beirut River, which has helped pacify the agitated public. Many citizens have resorted to burning the garbage, filling the air with pollutants and carcinogens such as lead and arsenic. “Burning waste is suicidal.”

Out of sight, out of mind?

Now, however, the medical community is bringing up concerns about the health implications of the crisis. Doctors are seeing spikes in severe respiratory diseases and gastrointestinal problems due to exposure to pollutants and aggressive viral infections, which they link to the disaster. Untreated and unmanaged waste threatens the water supply; exposure to higher levels of pollution has led to increased cases of asthma and allergy problems. Hospitals have been full and infections have been known to last months. The environmental tolls are equally grave. The Beirut River is a tributary of the Mediterranean; long-term pollution to waterways could be devastating.

So, why is this still going on? Wadih Al-Asmar, an activist of YouStink, a group formed in 2015 to protest against the crisis blames the incompetent government: “We are not asking for an impossible thing. It’s obvious all countries should have a strategic plan on waste management.” Lebanon’s system of governance distributes power across the country’s different confessional groupings.  The National Pact, established in 1943 prior to independence, was seen as a way to make the government more representative of its population, at that time. The pact is a power-sharing arrangement between Lebanon’s Christian and Muslim communities whereby the president is always a Christian, the prime minister a Sunni Muslim, and the speaker of the National Assembly a Shiite Muslim. Other minority groups are also assigned specific positions. As the influence of constituent populations has shifted due to the influx of Syrian refugees, the exodus of marginalized groups, and Iranian participation in Shia politics, this system has decreased in efficacy and it is nearly impossible for the country’s leaders to reach consensus on any issue, local or international.

Lately, political attention has been focused on the recent cut in 4 million dollars in aid to Lebanon by Saudi Arabia which is displeased by Lebanon’s support for Shiite political and religious movements. Saudi Arabia has been vocally opposed to the growing Shia tendency, particularly stemming from Iran, to stoke unrest throughout the Middle East. The aid was primarily earmarked for the Lebanese military and this dramatic development has pulled government attention even further from domestic issues like disrupted basic services which are neither new problems nor priorities for Lebanese leadership, despite the public’s frustration.

Officials proposed to pay a British firm to ship the waste abroad and dispose of it ecologically. The plan would be far most costly to operate than the now-closed landfill was. “It’s a crazy solution in a country of crazy people,” said agriculture minister, Akram Chehayeb, who expects 2,000-2,500 tons of rubbish would need to be shipped per day, ultimately costing the country $176 million per year. Lebanon has missed several deadlines with the firm due to concerns about the program’s cost, and so the garbage keeps piling up, people continue to suffer increased health problems, and the environment faces long-term damage, all of which could have been prevented. The latest negotiations fell through on February 19th when the British company, Chinook Urban Mining, failed to submit paperwork by an agreed deadline that showed Russia would accept the garbage, a spokeswoman for Lebanon’s Council for Development and Reconstruction (CDR) told CNN.

Struggling with a quality of life obstacle such as mountains of garbage may seem to differ from the reverberating cries for greater human rights and political reforms that began with the Arab Spring in 2011, but the waste management problem in Lebanon is yet another manifestation of poor governance throughout the region. It is emblematic of broader socio-economic issues such as high rates of unemployment and dramatic housing shortages and costs that states have lost an ability to direct or control. That a man-made disaster has resulted in a public health emergency and environmental damage demonstrates a particular type of political stagnation and failure.

The following ideas can be used as prompts for class discussion, as essay questions, or role play activities. The disciplines of social studies, history, economics, civics, contemporary world history, science, and religion can all be touched upon from the story above so adapt as needed to suit your particular age group and subject areas. Feel free to share your ideas with us!

Interested in learning more about this problem? Explore below!

This Reuters series of images highlights the magnitude of the problem.