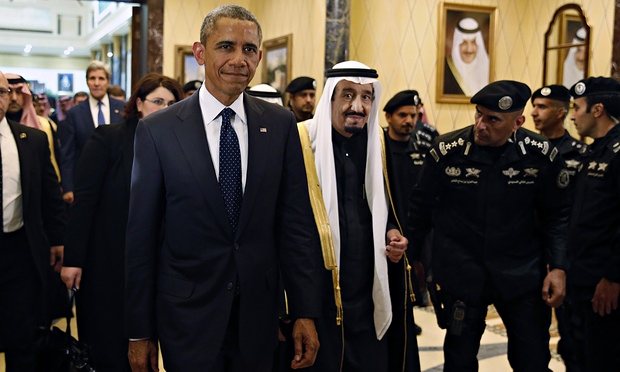 Early in March, President Obama told The Atlantic that Saudi Arabia had been a “free rider” in American foreign policy and criticized the country for refusing to negotiate with Iran. Prince Turki al-Faisal, a senior prince in Saudi Arabia and former ambassador to the United States, responded Monday with a vehement open letter to the president. Faisal pointed to Saudi support for Syrian rebels, humanitarian aid for refugees, and recent creation of an Islamic anti-terrorism coalition as evidence that Riyadh is not simply piggybacking on U.S. policy.

Tensions between the U.S. and Saudi Arabia have been mounting in recent years, particularly since the Arab Spring, which Saudi Arabia saw as a threat to its stability, but which Washington hailed as a new era of democratization. This year, Riyadh has expressed concern as America seems to be pulling out of the region, becoming reluctant to assist Saudi Arabia in Yemen and Syria, and making a nuclear deal with its rival Iran. The two countries have historically been very close, cooperating during World War II and the Cold War, but many think the relationship is drifting apart.

U.S.-Saudi relations have never been in complete harmony. The Israel-Palestine conflict has been a source of contention from that first meeting between King Abdulaziz …

Consult a few of the following articles and decide how you think the American-Saudi relationship will evolve. Is there an actual rift between these two global superpowers or is the media exaggerating the typical fluctuations of a long-term relationship? Is this simply a matter of leadership differences of opinion or indicative of a more substantial and lasting shift? How could changes in the relationship influence other policy areas, such as the Syrian civil war and Daesh, the Western relationship with Iran, or other potential allies for the nations? What other possible outcomes can you predict? Be able to support your ideas with evidence. Explore other opposing points of view on cultural, social, and economic issues to learn more details about the U.S.-Saudi relationship, its history and its future. The topic could be explored in a compare and contrast essay or in a classroom debate.