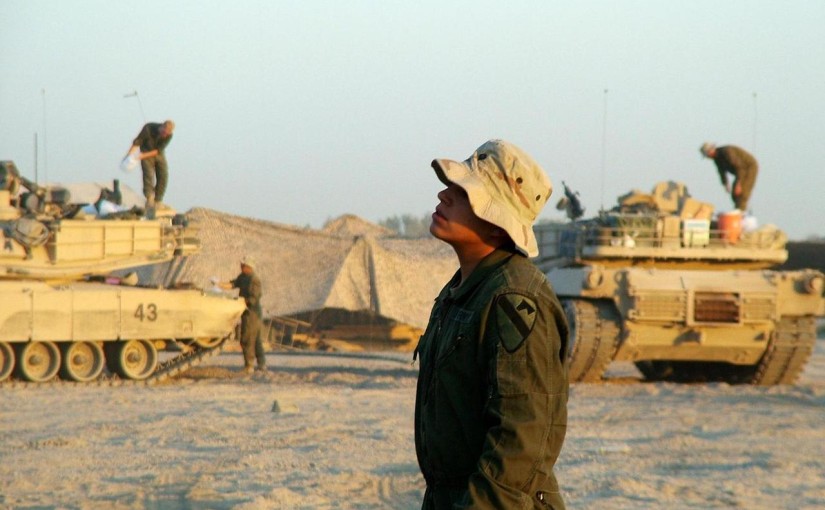 Jeffrey Crisp, senior director for policy and advocacy at Refugees International, and Rochelle Davis, associate professor of cultural anthropology at Georgetown University, join Andrew Parasiliti, director of the Center for Global Risk and Security at the RAND Corporation, to discuss the long-term welfare of Syrian refugees and the burden on host countries. Davis and Crisp describe the current demographics and conditions of refugee communities, noting that after three years of conflict in Syria, refugees are more often leaving the country in destitute conditions.

Speaking to on the Frontline on Euronews, Marc Pierini was asked what he believes Europe should do to stop more of its citizens from joining militant groups, including the Islamic State (IS), in Syria and Iraq, and how unified the EU’s strategy is to deal with foreign fighters if and when they return home.

Chemical Secrets of the Iraq War

The United States went to war in Iraq expecting to destroy an active program for weapons of mass destruction. Instead, it found only remnants of chemical arms built in close collaboration with the West. This video is meant to accompany the New York Times article, “The Secret Casualties of Iraq’s Abandoned Chemical Weapons”. Length: 13:14.

Confronting the Islamic State in Iraq and Syria: Challenges and Options

The Middle East Institute and the Conflict Management Program at the Johns Hopkins School of Advanced International Studies hosted a panel discussion on the status of the Islamic State and what Iraq, the United States, and other regional actors must do to confront the rise of the self-proclaimed caliphate. The panel included MEI’s Richard A. Clarke, Steven Simon, Randa Slim, and Daniel Serwer, as well as Iraq analyst Omar Al-Nidawi.

The Fight Against the IS

ISIS: Everything you need to know about the rise of the militant group

The rise of Islamic State in Iraq and Syria (ISIS), the Islamist militant group that has seized a chunk of land stretching from northern Syria to central Iraq, has struck fear into the hearts of leaders around the world. CNN explains ISIS’ roots, what it controls, and where its support comes from.

MA Candidate Alex Auman had the opportunity to sit with the dean of the Josef Korbel School Christopher Hill to ask him questions about the current situation in Iraq.  Hill is the former Ambassador to Iraq.

Muslim Shrine Stands as a Crossroads in Syria’s Unrest

This video accompanies the New York Times article of the same name; it explores the significance and current state of the Sayeda Zeinab shrine in Syria.

Bob Schieffer, Dr. Kathleen Hicks, Dr. Kimberly Kagan, and Heather A. Conley discuss some of the most pressing foreign and domestic issues of Iraq, Syria and ISIS. Length 58:24

The Syrian Refugee Crisis and Lessons from the Iraqi Refugee Experience

This presentation was part of the Spring 2013 Institute for Iraqi Studies Workshop: The Syrian Refugee Crisis and Lessons from the Iraqi Experience, held at Boston University on March 29, 2013. During the workshop, participants compared the two refugee crises, looking to draw upon lessons from the Iraqi experience.

The civil war endangers cultural artifacts in Syria. Aleppo, Syria largest cities and one of the world’s oldest continually inhabited urban areas is now the site of heavy fighting, damage, and death as a result of the Syrian civil war that began in 2011. In this public radio story you go to a museum exhibit of ancient Aleppo to understand what’s at stake with the violence of the civil war.

Iraq Divided: The fight against ISIL

As the US strikes ISIL targets in Iraq, Aljazeera English reports from Irbil on the consequences of the latest foreign intervention.

The extremist group ISIS, now calling itself the Islamic State, continues to grab headlines with its brutal campaign across Iraq and Syria. But much of what we’ve seen of the Islamic State comes filtered through its own well-oiled media machine. NPR talks with Sebastian Meyer about the images the Islamic State wants the public to see.

This Public Radio Story describes the great importance of Syria’s ancient cultural heritage sites, for Christians, Jews, Muslims, and people of many other national and ethnic identities. Unfortunately, these sites are under attack as Syria’s civil war rages on.

In Iraq, Trains Herald Both Progress and Loss

This slideshow provides a peek into the importance and status of trains in modern Iraqi life.