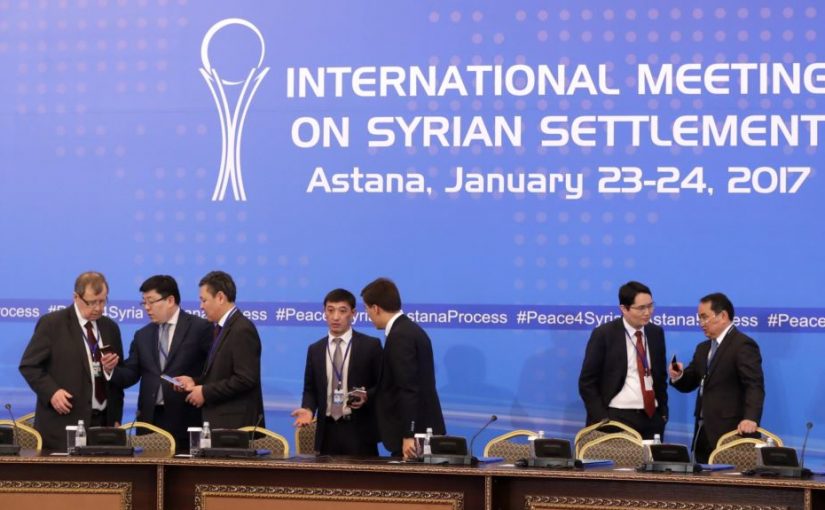 1. What has been the focus of these talks?

The Arab Spring protests in Syria led to the current Syrian Civil War that is now in its sixth year. The Syrian Civil War originally began after teenagers spray painted the word “freedom” on buildings; this teenage rebellion was met with harsh crackdowns from the Assad regime. After years of fighting between regime forces, the Islamic State, and opposition groups, other players have become involved in the conflict. Those actors principally include Russia and Iran, both of which back the Assad regime; Turkey, which has supported rebel forces; and the United States, which has provided material support and training to certain rebel groups. Humanitarian efforts from local groups as well as organizations such as the UNHCR are attempting to help those caught in the crossfire

2. Who participated in the talks, and who opted out?

Originally set to take place on February 15th in Astana, Kazakhstan, the third and most recent round of Syria Peace Talks in which external actors gathered to try to broker a deal for peace were set back a day due to “technical reasons.” Those invited to the table include the representatives of the Assad regime, Russia, Iran, Turkey, and certain opposition groups; rebels initially planned to not to attend the most recent gathering due to frustration with the previous talks held on January 23-24th. According to Al Jazeera Mohammad Al Aboud, a senior rebel official said, “the opposition factions will not attend Astana because the Russian side did not abide by what they agreed to before, during and after Astana to uphold the ceasefire agreement.”

3. What happened at the previous talks?

In total there have been three rounds of peace talks: the first on January 23-24th; the second on February 6th; and the most recent, between February 16 and 17th. The Syrian Peace Talks in Astana this past January opened with Kazakhstan’s Foreign Minister Kairat Abdrakhmanov saying, “It is our most sincere desire that these talks will bring light at the end of the tunnel for the Syria crisis . . . It is now upon each of us to make the real breakthrough that Syrian people rightfully deserve.” The purpose of the January talks in Astana was to reaffirm that all parties agree to a nationwide ceasefire and that all parties were committed to upholding the agreement. According to the Centre for Research on Globalization, at the second Astana peace talks “the Russian delegation proposed a new draft constitution for Syria, which can promote a dialogue between the Syrian government and the Syrian armed opposition.” The new Syrian constitution that Russia proposed was one of the topics set to be discussed for the Astana peace talks that happened on February 16-17th. According to organizers, the Astana peace talks have built the foundation that the upcoming UN-backed Syria Geneva talks February 23rd can use to make tangible progress on finding a resolution to the conflict.

4. What was the outcome of the third Kazakhstan talks?

Russia’s lead negotiator, Alexander Lavrentyev, concluded that the talks resulted in “. . . close and sound work with the representatives of Syrian armed opposition groups here in Astana, with the government delegation and our tripartite consultations between Russia, Turkey and Iran, which allowed us to reach a modest but real result by establishing the Concept Paper on the Joint Group that will determine control over the ceasefire.” The rebel groups attended the talks although there was originally uncertainty over whether the rebel groups would attend.  However, in an Al Jazeera article, Chatham House MENA Program associate fellow, Haid Haid, said there is “no common ground between Turkey, Russia and Iran,” which prevents any potential progress. The third Syria Peace Talks have concluded with much work still to be done. With the UN-backed Syria Geneva talks scheduled February 23rd, it remains to be seen whether these preliminary efforts will have any impact on long-term, sustainable peace-keeping measures.