Since the 1979 Iranian Revolution, that has changed, and there was even a short-lived moment (right before the Syrian civil war broke out) where it seemed that Iran was poised to challenge for at least regional hegemony in the Middle East. That chance collapsed, and Iran has been consigned to the position of a secondary regional power for the foreseeable future. The four maps below explain why. 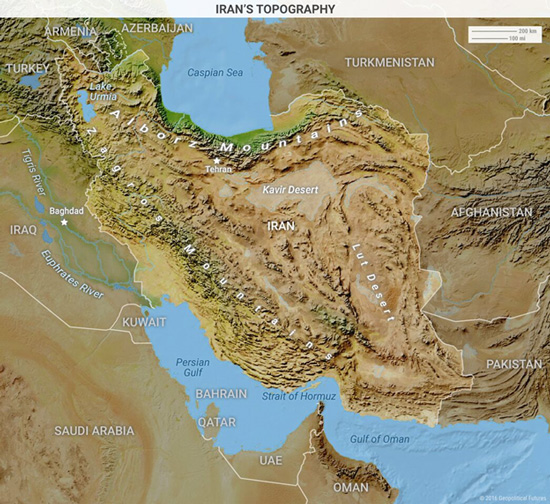 Geography has always been a double-edged sword for Iran. In terms of both area and population, Iran is the largest country in the Middle East and the 17th largest in the world.

Iran’s main population centers are surrounded by mountains and deserts. This simple fact defined ancient Persian strategy and continues to define Iranian strategy today. Iran’s mountainous geography has made the country extremely hard to conquer, but it has also prevented Iran from easily projecting power abroad.

The most advantageous place for Iran to project power is to its west. Alternatives present serious obstacles. Iranian influence is pronounced in Afghanistan, but this country has even more mountainous, tribal territory with relatively less useful land. Central Asia is another place Iran’s influence extends, but here too, the land isn’t worth the cost of marshaling forces over the mountains to conquer it. The Caucasus is a non-starter, since the terrain makes it very difficult for any military to invade. Thus, Iran can only expand westward.

One last thing to note about this first map is that even though Iran sits on the Persian Gulf, the Strait of Hormuz is so narrow it blocks any conceivable advantage for Iran. The Persians never became a naval power because whatever forces they developed could be easily hemmed in. With the rising importance of oil, which has only become a key resource relatively recently, the Strait of Hormuz has become more significant as a transport route. Iran has threatened to place naval mines in the strait. But that is a defensive and fairly dangerous card for Iran to play. Iran is a land power. 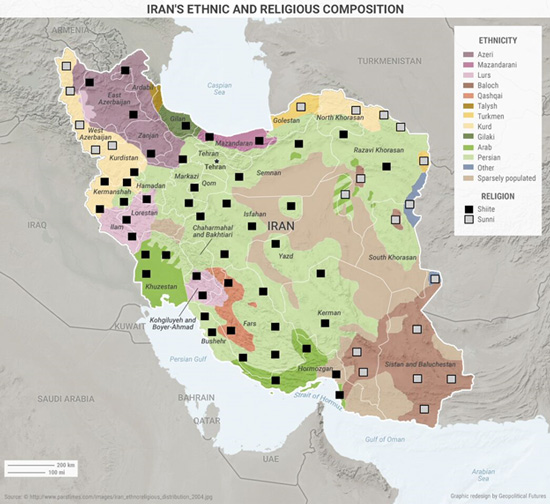 A secondary consequence of Iran’s mountainous geography is the development of many different ethnic groups. Iran is roughly 60% Persian, and Farsi is the only official language for the entire country. But at least seven other languages are recognized at the regional level, and dozens more are spoken throughout the country.

The map above helps illustrate the complexity of Iran’s ethnic, linguistic, and even religious makeup. The Persian heartland is clearly visible in the center of the country and is surrounded by mountains. But there are sizable populations of Arabs, Kurds, Azeris, Turkmen, Balochs, and other groups spread throughout the country. Iran is roughly 90% Shiite, but there are pockets of Sunnis as well, so even in this sense, Iran is not homogenous.

This means that whoever governs from Tehran must have some way of keeping such a diverse population together in one state. That has historically meant strong central governments with strong coercive and institutional capabilities that allow Iran to impose its writ over the entire population. 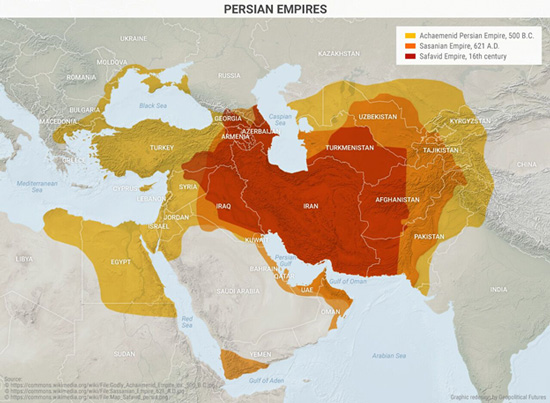 The Zagros Mountains protect Iran from would-be challengers, but they also box in Iran. If Iran wants to project influence into what is today Iraq, one of two conditions must exist. Either Iran must be incredibly wealthy and militarily strong, or it must be able to take advantage of weakness.

The latter phenomenon has happened a fair number of times throughout history, giving rise to various Persian empires. But those times have always been when Mesopotamia was weak and unable to resist Iran’s advances.

Take, for example, the period before 2011. Iran was building an arc of Shiite influence in the Middle East. The US invasion of Iraq in 2003 eliminated Iran’s biggest rival, Iraq, which was able to fight Iran to a draw in an incredibly bloody war from 1980 to 1988. This was despite having a population roughly a quarter the size of Iran’s. Syrian President Bashar al-Assad’s Alawite regime was an Iranian ally. And Hezbollah’s dominance of Lebanon meant Iran was looking at being able to project power all the way to the Mediterranean.

The Syrian civil war dashed that dream. The rise of the Islamic State posed an existential threat to Iran. The specter of a strong Sunni Arab power in the heart of the Middle East could not be tolerated and has driven the US and Iran into an uneasy but stable partnership. Iran wants to influence Baghdad, but it funds and supplies various Shiite militias in Iraq. This is not just for ambition’s sake, but to ensure that Iraq’s Sunni minority does not threaten its security. The Assad regime has been weakened, and Iran can no longer count on contiguous influence stretching to the Mediterranean.

In addition, while the Arab world is in chaos, Israel is sitting pretty and Turkey is a rising power. Turkey has almost the same population size as Iran, sits on more strategically advantageous territory, and has a more advanced economy and military. Turkey is going to be the dominant power in the Middle East, and Iran will have to settle for being a regional power, able to influence countries in the region but not to push beyond. 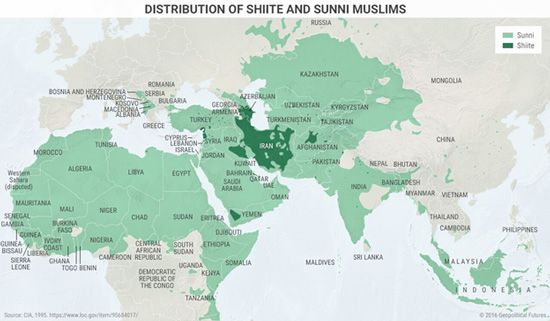 Despite its diverse population and its challenges in projecting power, great empires have risen from this part of the world and dominated most of the Middle East. The boundaries of these various empires, however, have always been fairly consistent.

Persia’s maximal level of expansion is from the Hindu Kush in the east, to Cairo in the south, to Istanbul in the north. Only the ancient Persian Achaemenid Empire managed to go further, making it to the coastal regions of the Black Sea. This was because the rest of the Middle East was in tatters and in no place to resist the Persian advance, and neither were the regions in Europe to which they spread. When the Persians did face resistance, as they did in present-day Greece, they were eventually beaten back by the outnumbered Greeks. Persia never seriously threatened Europe again after the Achaemenid Empire fell.

Iran’s influence outside its core territory has always been subtler than outright subjugation or control. Its geographic limitations have meant that on some level, it had to cooperate with locals that it hoped to rule, which led to a blending of cultures and ideas. Before the rise of Islam, the dominant religion in Persia was Zoroastrianism, the principles of which survive today in both Judaism and Christianity. Both religions incorporated basic tenets of Zoroastrianism and would be completely different if they hadn’t.

Persia’s adoption of Islam is a good example of its ability to incorporate elements of different cultures and religions. Islam has two main sects: Sunni and Shia. Very few outside powers have ever conquered Persia outright the way Islam (an Arab movement in its origins) did. The fact that Farsi is written in Arabic script today is a sign of Islam’s impact on Persian culture. But the Persians were still able to retain their own language, which became the common language for the Turkic peoples of Central Asia, the Caucasus, Afghanistan, and South Asia. Farsi also influenced Urdu, Hindi, Bengali, and Ottoman Turkish. Persia was able to adapt to Islam without sacrificing major parts of its culture. To this day, Islam in Iran is uniquely blended in with society—Persia became a Shiite polity in 1501, and as the map shows, Iran is the only formidable Shiite power in the Muslim world.

All four maps above reveal that Iran is an influential power in its own right, with a proud history, culture, and way of doing things. But despite the impact it has had outside its borders, it is also fairly limited. Its cultural influence has diffused throughout North Africa, the Middle East, and Central and South Asia, but Iran’s ability to expand remains weak, even though its ability to defend its territory is strong.

Iran is a major regional power and the historical home of one of the world’s most influential civilizations. But Iran needs to meet certain conditions if it is to become more than a regional force, and there is little indication this will happen any time soon. Iran is, and will remain, a formidable geopolitical force, but its power is inherently limited by its geography.