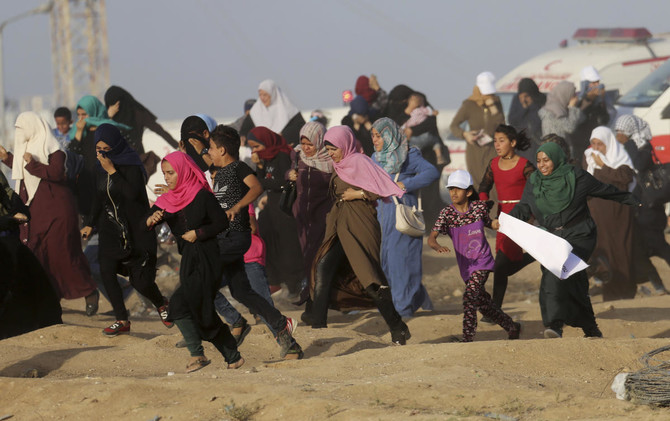 On Tuesday, thousands of Palestinian women demonstrated along the Gaza-Israel fence, the first mass women’s protest since the onset of the “Great March of Return” demonstrations. Women and their children from across the Gaza Strip arrived in buses to take part in the demonstrations. Seventeen people were wounded from Israeli gunfire, as reported by Ashraf Al-Qodra, Gaza’s health ministry spokesman. “I came to finish the march that my daughter had started,” Rim Abu Irmana said, waving a picture of her 15-year-old daughter, Wasal, who was killed by Israeli gunfire on May 14. “These demonstrations are peaceful. We are only defending our land and our rights.” Photo above: Palestinian women protesters run for cover from teargas fired by Israeli troops during a protest near the Gaza Strip’s border with Israel, east of Gaza City. (AP)

Also on Tuesday, Human Rights Watch said that Syrians working to uncover mass graves in an area once ruled by the Islamic State group need help to preserve evidence, identify human remains and shed more light on the horrors perpetrated by the militants. Thousands of bodies — of civilians slain by the extremists, residents killed in airstrikes by the U.S.-led coalition and of IS fighters — remain to be recovered in several mass graves in and around the city of Raqqa. The appeal came in a new report released Tuesday by the New York-based group. Raqqa was the Islamic State’s de facto capital and the seat of their self-proclaimed caliphate, which at the height of their power in 2014 stretched across a third of both Syria and Iraq. Since then an array of Syrian and Iraqi forces have driven IS from virtually all the territory it once held, but the group is still present in remote areas along the border. IS carried out mass killings and other atrocities, including public beheadings.

HRW said identifying missing people and preserving evidence for possible prosecutions is critical for Syria’s future. “Raqqa city has at least nine mass graves, each one estimated to have dozens, if not hundreds, of bodies, making exhumations a monumental task,” said Priyanka Motaparthy, HRW’s acting emergencies director. “Without the right technical assistance, these exhumations may not provide families with the answers they have been waiting for and could damage or destroy evidence crucial to future justice efforts,” she added. Recovery and analysis of remains from mass graves is a complex process that requires a high level of expertise. Exhumations carried out without forensic experts can destroy critical evidence and complicate the identification of bodies, the report said. In 2016, The Associated Press documented and mapped 72 mass graves in Iraq and Syria, with many more expected to be uncovered. In Syria, the AP obtained locations for 17 mass graves, including one with the bodies of hundreds of members of a single tribe all but exterminated when IS extremists took over their region. At the time, between 5,200 and more than 15,000 people were believed buried in the graves.

Souad Abderrahim of the Ennahada Party became the first elected female Mayor of the Tunisian capital of Tunis on Tuesday. She defeated a city official who served under former President El-Abidine Ben Ali, Kamel Idir, a member of the Nida Tounes party of current President Beji Caid Essebsi. “I dedicate this victory to all Tunisian women,” Abderrahim declared. “My first task will be to improve the face of Tunis.” Since the 2011 Arab Spring, Tunis has been suffering from the deterioration of waste management services. Abderrahim announced in an interview with The Associated Press that cleaning up the capital and planting trees would be her first priority. This is a smaller component of her larger goal to modernize the image of the Islamist Ennahada Party. In 2016, the party emphasized its democratic values and its commitment to separating religion from politics. “We have chosen transparency as a slogan,” Abderrahim said. Tunisia is at the vanguard of safeguarding and promoting female political participation in the Arab world. In fact, polls indicate that women made up 47 percent of those elected in recent local races.

On Wednesday, the British Minister of State for the Middle East Alistair Burt announced that several European countries were joining forces to prevent the planned demolition of a Bedouin community, Khan al-Ahmar, in the West Bank. France and Ireland issued similar statements condemning the Israeli decision to raze Bedouin villages to make room for Jewish settlements. The UN expressed its dismay over recent Israeli actions as the office of Nikolay Mladenov, the UN Special Coordinator for the Middle East Peace Process, tweeted that the envoy “condemns the demolitions at Abu Nuwar and preparations to demolish Khan Al Ahmar.” The European Union joined the criticism early on Thursday, saying in a statement that the demolitions “together with plans for new settlement construction for Israelis in the same area, exacerbate threats to the viability of the two-state solution and further undermine prospects for a lasting peace.” The statement further said that the EU “expects the Israeli authorities to reverse these decisions and fully meet its obligations as an occupying power under International Humanitarian Law.”

Also, on Wednesday, Hossein Kazempour Ardebili, the Islamic Republic’s OPEC governor, taunted Donald Trump after the latter’s tweets attacking the Organization of Petroleum Exporting Countries. President Trump claimed that OPEC is “doing little to help” the rising gasoline prices, rather “they are driving higher”. Regional tensions and OPEC policy is heating up as Trump continues to blame the group for the rising prices, following his resumption of sanctions on Iran. Deputy commander of the Sarollah Revolutionary Guards in Iran said, following the tweet, that any attempt to thwart its oil exports will result in the closure of the Strait of Hormuz, the world’s most important oil checkpoint in the Persian Gulf. “Your tweets have driven the prices up by at least $10 per barrel,” Kazempour backfired at Trump, “You impose sanctions on major producers, founders of OPEC, and yet you are asking them to reduce the prices?! Since when did you start ordering OPEC!”

The OPEC Monopoly must remember that gas prices are up & they are doing little to help. If anything, they are driving prices higher as the United States defends many of their members for very little $’s. This must be a two way street. REDUCE PRICING NOW!

As Egypt’s population hits the milestone of 100 million, President Abdel-Fattah el-Sissi is rolling out a family-planning campaign called “Two is Enough.” The campaign, supported by the United States and the United Nations, is not compulsory like China’s rule limiting children. Instead, authorities want to persuade young couples to stop at two kids. “The two biggest dangers that Egypt faces are terrorism and population growth, and this challenge decreases Egypt’s chances of moving forward,” el-Sissi said last year at a youth conference. In addition to a media campaign encouraging fewer births, the “Two is Enough” campaign provides maternal and child health care, plus cash support to 1.15 million women in the country’s poorest families. To help the cash-strapped government in Cairo, the U.S. Agency for International Development will provide Egypt with $19 million over the next five years to help state-run clinics and nonprofit groups increase the use of contraceptives and improve women’s health. In addition, the U.N. Population Fund allocated about $6 million this year for reproductive health services in Egypt. Social values could impede the program’s success. Rural women lack access to information and resources. Moreover, an official with the country’s primary welfare agency noted that “Many believe more children offer more economic support in old age,” since millions of Egyptians enter retirement without a pension. “Also driving up birthrates is competition between sisters-in-law over who has the most children and concerns that if they do not give birth to a son, husbands may take another wife.”