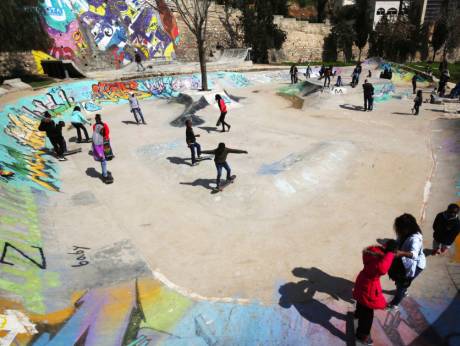 For this round of WIME, we have highlighted some social and cultural stories to remind readers that the Middle East is not just home to conflict and enmity. Even so, like life everywhere, sports, art, housing and music (and everything else!) are influenced and must be contextualized by politics, economics, race, gender, religion, history and class. See some of the examples in this following stories. First, from Saudi Arabia, came a surprising addition to Crown Prince Mohammed bin Salman’s efforts to transform the kingdom’s image, economy and society, after an announcement that non-combat roles will be opening up for women in the military. The initiative to engage women in security roles allows for the country to move in a direction toward equal opportunity for women in the workplace. The roles do not appear to involve combat. A list of 12 requirements says hopefuls must be Saudi citizens, aged between 25 and 35, and have a high-school diploma. Allowing for women to join the military represents continued progress towards a more inclusive Saudi society.

Indeed, much publicity has been given to the expanding list of opportunities being made available to Saudi women. They participated for the first time in an all-female “marathon” on Saturday morning. The 3km marathon, al-Ahsa Runs, welcomed 1,500 girls from across kingdom. A 28-year-old graphic designer, Mizna al-Nassar, won first place, completing the race in 15 minutes. She said she had always been supported by her family to pursue sports since she began competing in 2014. She hopes to represent the country in the Tokyo 2020 Olympic games. The goals of the event were to advance running as a sport, spread sports knowledge among the community and encourage a healthier life style. Also over the weekend, the Ministry of Labor and Social Development and Human Resources Development announced that it will develop 233 child-care centers to help support women working in the private sector.

In other news, outside of the kingdom: