The Middle East is often portrayed as an outlier when it comes to human rights, yet, the outbreak of the Arab Spring and the intense digital campaigning that followed proved that rights have become the popular language of protest. The locus of human rights is no longer exclusive to state or inter-state organizations but rather draws heavily upon civil society. The articulation of grievances by youth activists undeniably changed the landscape of domestic politics. Numerous organizations came forward defending several causes such as the promotion of prisoners’ rights, dissidents, women, the LGBT+  community, and the disenfranchised. The richness of activism in Middle East and North Africa (MENA)  relies not only on the groundbreaking work done but it also builds upon a large overseas diaspora. This blog features leading activists who actively advocate and contribute to the advancement of human rights in the Middle East.

Loujain al-Hathloul is one of the most prominent and outspoken women human rights defenders in Saudi Arabia; much of her activism is conducted via commentary on social media. In 2013, Al-Hathloul was the figurehead of what became known as the 26 October Driving Campaign against the driving ban through public films of her driving. Her activism also focuses on the end of the male guardianship system that long infantilized women in Saudi Arabia. According to Amnesty International, al-Hathloul “made waves” by “posting a video of herself with her hair and face uncovered, in defiance of the country’s ultraconservatives.” Al-Hathloul actively defended the right to vote and stand in elections for women having run herself as a candidate in November 2015. Her popularity and the international attention she attracted soon led Saudi officials to detain her in May 2018. Al-Hathloul remains in detention. During the first three months of her detention she was held incommunicado, and was subject to physical and moral torture. On March 13, 2019, she was convicted for numerous charges including the promotion of women’s rights, the end of the guardianship system and contacting foreign media outlets and journalists. Her last court appearance was on April 3, 2019. She remains in prison pending her next court session. On August 31, 2020, Al-Hathloul’s family members were allowed to visit her after being denied contact with her for six weeks.  According to Lina al-Hathloul, her sister Loujain would “rather be in prison, following her values and fighting than be released and lose these two years for nothing.”

Lina Attalah’s work is iconic in many respects. Attalah is the chief-editor and co-founder of the leading Cairo-based independent news website Mada Masr. The news outlet is a well-regarded source “that attempts to secure a house for a dislocated practice of journalism that did not survive in mainstream organizations and their associated political and economic conditions.” Attalah has extensively defended and fought for press freedom. Her forefront work of investigative journalism exposing high-level corruption, misconduct within the government, the role of security apparatus, and the plight of Sudanese refugees in the country has alienated the Egyptian authorities resulting in her arrest in 2020. In 2017, she was recognized as a “New Generation Leader” by Time Magazine. She has also been referred to as the “Muckraker of the Arab World.”

Ahmed Douma is a prominent human right, political activist, poet, and figurehead of the pro-democracy 6 of April and the Kefaya (Enough!) youth movement that ousted former president Hosni Mubarak in 2011. Ahmed Douma’s contribution to Thawrat 25 Yanayer ( the January 25 Revolution) is undeniable. His engagement was made “so that the Egyptian person regains his or her dignity, Egypt’s democracy will be born, social justice will prevail, and jobs and opportunities will be available for all Egyptians, particularly the youth.” On Friday, February 4, Douma along with one million Egyptian protesters took the streets on “Friday of Departure” demanding the toppling of Mubarak’s autocratic government. Currently, Douma is a prisoner of conscience purging a 15 years sentence. The charges were upheld at a retrial on July 1, 2020. Ahmed Douma was “swept up in a crackdown following the military toppling that year of Mohamed Morsi, Egypt’s first and only democratically elected president.”

Sara Hegazi was an outspoken queer and LGBT+ rights advocate. According to Al Jazeera, “Sara Hegazi rose to prominence after raising the LGBT rainbow flag at a concert in Egypt in October 2017.” Hegazi claimed her own life on June 14 in Canada where she sought exile after her detention in Egypt. Activists paid a due tribute to Hegazi on social media, with the widespread use of the hashtag #RaiseTheFlagForSarah. Hegazy’s activism brought a sharp focus on hope and promise giving way to fear in Egypt. Her engagement and tireless advocacy for the LGBT+ community are more present than ever as a surge of homophobia and discriminatory practices are targeting the LGBT+ community in the Arab world. A study conducted by the Arab Knowledge about Human Rights (ANKH) reveals that a quarter of online hate speech in the Middle East and North Africa urges violence against LGBT+ people and 15% made direct threats. A very moving piece written by Tareq Baconi entitled Our Lives are Not Conditional pays tribute to Sara Hegazi’s activism and legacy and also gives insights to the feeling of estrangement as an LGBT+ person in the MENA region. 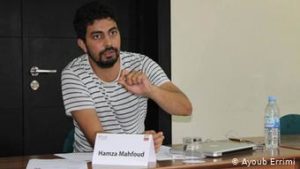 Popular Leader of the 20 February Movement

At 25, Hamza Mahfoud signed the slogans of the 2011 protest marches in Morocco. During the 20 February demonstrations, he voiced the demands of youth and the disadvantaged. Itinerary of an activist from the early days of the “Moroccan Spring”. Mahfoud’s notoriety resides on the fiery slogans demanding governmental reforms and social justice. To his activism, he joins a passion for journalism that he pursues professionally. His creed is non-violence and the need for democratization in Morocco through the framework of a parliamentary monarchy. He is relentless about the reform prospects in Morocco as he stated, “We are not going to let up until this country changes.” On the 20 February Movement  platform, Mahfoud is famous for writing and publishing the lyrics of a song that crystallized the then-popular demands:

The only solution, among all solutions,
The fall of the government,
The dissolution of parliament,
The change of the constitution,
The release of political detainees,
The liberalization of the information sector,
Listen to the voice of the people:
The Makhzen is out,
19, get out!
Morocco is a free land,
February 20th is a free revolution.

Omar Radi is an award-winning journalist and human rights activist. Amnesty International describes Radi as a “vocal critic of the Moroccan government’s human rights record.” The journalist has made public his extensive work on domestic corruption through his articles in leading newspapers and information websites such as Le Monde, El Paìs, and Le Desk. His investigations have focused on political affairs including the political and economic ties between politicians and business elites in Morocco. He is notorious for an investigation entitled “Servants of the State”, an investigation that revealed the names of 100 senior state officials alleged to have illegally acquired land led the authorities to question him several times. On July 29, 2020, Radi was charged with “harming national security” and “rape”. In a recent report, Amnesty International confirms that Moroccan authorities had been subjecting the journalist to legal harassment soon after the publication of a featured Amnesty International report revealing that Morocco had unlawfully spied on Radi through his phone. Press Freedom advocates are calling Radi’s arrest and charges “retaliatory.” In an interview for Democracy Now, Omar Radi reiterates that he is “an individual that needs to do his journalism in a safe way and people let me do it in peace and also let me express myself as I want to.”