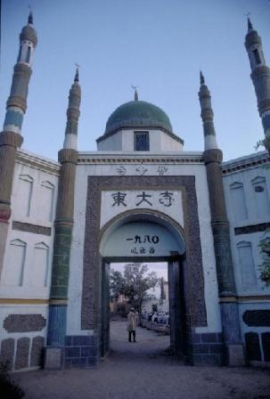 Discover the great diversity of the nearly one and a half billion people who belong to the community of Muslims.

One way to begin to think about the “Muslim world” is to examine the concept of an average American. Is there such a thing as a typical American who embodies the essence of “American-ness”? In the United States at least, it is understand that the people who live there are a rather diverse group, and that there are so many differences among them that the fact that they reside in the same country isn’t really enough to make them into a monolithic group?

For example, if we invited guest speakers to a classroom from, say, China, Germany, and Brazil to talk about their cultures and daily lives, we wouldn’t assume that they were similar at all, even if they all happened to be Christians. However, when thinking of Muslims, Americans might assume much more uniformity.  If all our three guest speakers happened to be Muslim, for most Americans, that fact would tend to eclipse their cultural, linguistic, socio-economic and other differences.  In reality, Islam is historically and doctrinally linked to Christianity and Judaism, though it is often seen as distinct from and at odds with the two other Abrahamic religions.

To understand the incredible diversity of the world’s Muslim communities, we should first think about the many factors that contribute to who we are and what our lives mean. Each of us has a number of intersecting identities. For example, we all:

Of course, we can continue to expand this list to include many more types of identity from fans of certain sports or music groups or teams, to physical abilities and body types, and on and on. Muslims have all of these multiple identities as well, and these differences shape their lives as they do everyone’s.

Where and How Do Muslims Live?

However, of the 1.6 billion or so Muslims in the world (over 1/5 of the world’s population), the largest ground can be found in Indonesia. In fact, if you look at the countries with the largest Muslim populations, we discover that only half of the top ten are in the broader Middle East, and only three are Arab countries.

Most Muslims live outside of the Middle East – the majority in Asia, and in fact, east of Iran. As you can see from the table, there is an enormous concentration of Muslims, nearly half a billion people, in three countries of South Asia: Pakistan, India and Bangladesh. African Muslims also make up a significant proportion of the total Muslim population. Not only does largely Arabic-speaking North Africa (Egypt, Libya, Tunisia, Algeria and Morocco) have over 180 million, but there are also approximately 220 million Muslims in sub-Saharan African countries as well. Some of these countries have Muslim majorities, like Senegal and Sudan; others have Muslim minority populations, like Kenya or South Africa. There is a large Muslim population in China, although a relatively small proportion of the whole; Chinese government figures put it at just over 20 million, but other sources claim it is higher. Of course, there are also significant Muslim minorities in European countries and the United States. France alone has a Muslim population of 5-6 million, primarily of North African descent. All together, less than 20% of the world’s Muslims are Arabs.

The enormous geographic diversity of Muslim societies means that there is also enormous cultural diversity. Muslims speak many languages, eat foods and wear clothing specific to their local cultures, celebrate holidays differently, and, of course, live according to the laws of their nations. They even practice Islam differently in many respects, just as Christians in different world regions have developed local practices in their worship. For example, in Indonesia, local shadow puppet plays present stories from the lives of the prophets and major figures from Islamic history; In Senegal, the majority of the Muslim population is affiliated with a Sufi order while Sufism is banned in Saudi Arabia. In Iran, women must cover their hair, albeit with many different interpretations, while in France there are laws preventing Muslim women from covering their hair in some public spaces, such as schools and government offices. Local cultures as well as local politics influence the practice of Islam.

Furthermore, individual within groups have their own preferences. The educational attainments, individual talents and aspirations, family culture and personal religiosity of a person have as much bearing on his or her practice of Islam as the broader societal mores around them. When one considers Islam and Muslims, it is important to be aware of this diversity of influences

This above map is taken from the Wikipedia entry on the Muslim World.  A map presented in this way shows a Muslim core in the Middle East, with, for the most part, less concentrated Muslim populations as you move further away from the region. Using only this kind of map, focused only on the percentage rather than the number of Muslims in a country, can unintentionally reinforce the common stereotype that Arab = Middle East = Muslim. While the map shows one aspect of world Muslim populations, it does not show the diversity of Muslim societies around the world, or even accurately reflect where most of the world’s Muslims live.

Until now, maps showing different perspectives on the world’s Muslim populations were few and far between. However, a Pew Forum demographic study of Muslim societies provides very interesting data and several informative and interactive maps, two of which below can constructively be used in comparison with that above.

The first map shows the actual populations of Muslims in various countries by a graduated circle, with the largest circles marking the largest actual populations of Muslims, not the proportion. This map looks very different from the map above, with much more weight on South and Southeast Asia and sub-Saharan Africa rather than primarily on the Middle East. This encourages us to think about the cultural diversity that underlies the religious practice and daily lives of Muslims in very different societies.

The second map is a cartogram, which allows even closer comparison of the numbers of Muslims in various societies (and prompts one to imagine a class exercise to develop a cartogram of other world religions).

The two most important themes to be drawn from this reading and the associated maps that can be used in the classroom are (1) the ethnic and cultural diversity of Muslim populations and (2) the concept that no map contains the whole truth about what it is mapping. The cartographers’ choices of what data to highlight and what data to omit can create very different results.