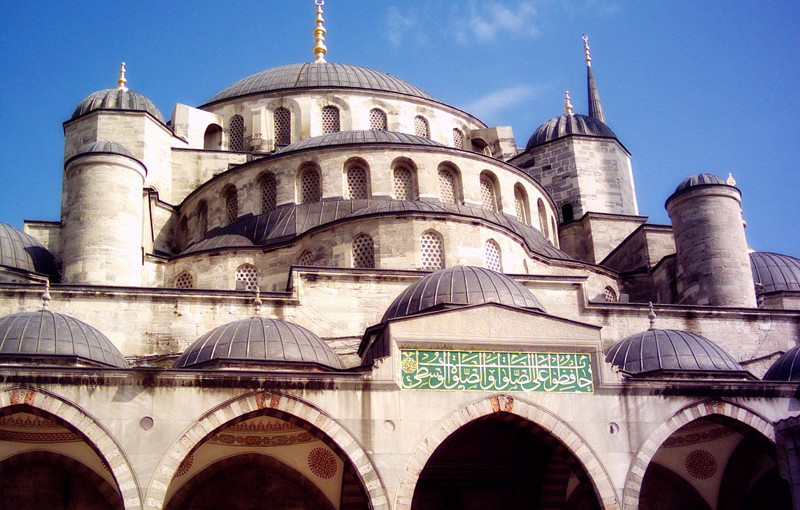 A printable version of this timeline is available for download at the bottom of this page.

Muslims and Jews are expelled from Spain at the behest of the Catholic Inquisition. The Muslims return to North Africa. The Spanish Jews, known as the Sephardim, scatter throughout North Africa, Italy, Turkey, and the Middle East. Those who reach the Ottoman Empire receive a warm welcome from the Ottoman ruler, Bajazet (also known as Beyazid II).

Ismail I conquers Persia and establishes the Safavid empire there. The Safavids claim descent from the Shi’a Imams and bring Persia under Shi’ite control.

The era of European imperial expansion begins with the Portugese colonization of Goa, in India. Expanding European powers will soon begin to pose a threat to Ottoman hegemony.

The Ottomans conquer central Arab lands, Egypt, and the Islamic holy cities of Mecca and Medina.

Suleiman the Lawgiver (known in the west as the Magnificent) ascends to the Ottoman throne. His reign marks the apogee of Ottoman power and influence.

Buda, half of the present-day city of Budapest, falls to Ottoman invaders. Suleiman annexes Hungary.

The Mughal Empire in India reaches its greatest extent.

Death of Suleiman; he is succeeded by Selim II, among the most disinterested rulers in Arab history.

The Ottomans, seeking primacy in the Mediterranean, declare war on Venice.

A Christian fleet comprised of the naval forces of Venice, the Hapsburgs, and the Papal States routs the Ottoman fleet at Lepanto, Greece .

Although Don Juan d’Austria retook Tunis for Spain, he was recalled and the Spanish permitted the city to fall to the reconstructed Ottoman fleet without resistance.

King Philip II, faced with a rebellion in Spain and distracted by an ongoing war of independence in The Netherlands, negotiates an end to the Mediterranean battles. The truce confirms boundaries between the Muslim and Christian worlds.

Pope Gregory XIII establishes the Maronite College in Rome, a result of growing recognition of the validity of the Maronite Church by the Catholic Church.

The Alawi dynasty, which claims descent from the Prophet Muhammad, assumes power in Morocco.

The Second Siege of Vienna. Under Jan III Sobieski, King of Poland, the Austrian, German and Polish armies defeat the Ottoman forces besieging the city. From this time on the Ottomans will find themselves on the defensive in Europe, as a coalition of European powers steadily encroaches on the lands under Ottoman control.

Birth of Muhammad Ibn Abd el-Wahhab, founder of the fundamentalist Wahhabi sect of Sunni Muslims, which insists on a literal reading of the Qu’ran, and enforces prohibitions against art, music, and the participation of women in public life. Ibn Abd el-Wahhab manages to forge a kind of ruling partnership with Ibn Saud, patriarch of the powerful Saud family in Arabia.

The Karamanli dynasty comes to power in Tripoli; it will last until 1835. Under its rule, much of what is present-day Libya achieves relative autonomy within the Ottoman Empire.

Catherine II (The Great) of Russia begins her reign.

Death of Ibn Sa’ud in Arabia. He is succeeded by Abdul Aziz I, ancestor to the current Saudi king.

The United States and Morocco sign a Treaty of Peace and Friendship .

The United States and the regency of Tripoli sign a Treaty of Peace and Friendship .

The United States and the regency of Tunis sign a Treaty of Peace and Friendship .

Napoleon’s armies invade Egypt and annihilate Mamluk forces at the Battle of the Pyramids .

Coptic activists such as Ya’qub Hanna make use of the presence of French General Napoleon Bonaparte in Egypt to agitate for Coptic equality and civil rights.

Muhammad Ali, an Ottoman army officer of Albanian origin, emerges from a local power struggle and is proclaimed Governor of Egypt by the Ottoman sultan. He eliminates the local Mamluk power base and embarks on an intense program of state centralization and military modernization. He puts in place the foundations of modern Egypt through reforms in education and agriculture and the expansion of the state bureaucracy. In giving employment preference to individuals with European-style education and training, Muhammad Ali contributes to the secularization of Egyptian society.

Death of Ahmad bn Mohamed al-Tijani, who founded the Tijaniyah Sufi order in 1781. This religious order spread Islam from the Algerian-Moroccan border southward into West Africa.

The United States and the regency of Algiers sign a Treaty of Peace and Friendship.

At the request of the Ottoman Sultan, Muhammad Ali’s reformed Egyptian army defeats the Wahabbis and takes Mecca, giving the expanding Egyptian empire a base on both shores of the Red Sea.

A French naval expedition force bombards and then invades Algiers, putting an end to Ottoman rule in that region, and marking the return of the European powers to North Africa. It will take more than forty years for France to subdue all of Algeria after the defeat of a popular resistance led by Emir Abdal-Qadir. The suppression of this resistance in 1844 effectively marks the beginning of a brutal colonization that will last for over a century.

Muhammad Ali defeats the Ottoman forces and occupies present-day Syria and Palestine, establishing his son as governor of those territories.

In Tunisia, ruler Ahmed Bey institutes a modernization scheme that includes the creation of modern armed forces, the integration of native Tunisians more fully into government, and the abolishment of slavery. The program saddles Tunisia with a large debt.

The Sanusiyyah religious order is established in Libya. Sanusiyyah is a Muslim reformist movement started a few years earlier in the Hijaz (Arabian Peninsula), before moving to Cyrenaica, Libya. It is primarily a missionary movement with the functions of spreading Islam and mediating conflict within the Muslim community. In the last two decades of the nineteenth century it will become a powerful political movement, as it tries to limit the power of the Ottomans in the Maghreb and to resist the Italian entrenchment in Libya.

The British capture the strategic port of Aden on the coast of present-day Yemen.

The Treaty of London grants Muhammad Ali and his family hereditary governorship of Egypt, but the European Powers and the Ottoman Sultan decide to limit the size of Muhammad Ali’s army. As a result, Ali’s economic and industrial projects, devised primarily to serve the interests of the army, are abandoned and the country falls into economic ruin.

Death of Muhammad Ali Pasha in Egypt. His son, Ibrahim Pasha, succeeds him. The Muhammad Ali family will continue to rule Egypt until the overthrow of King Farouq’s monarchy in 1952 by the military.

In Egypt, construction of the Suez Canal begins under French supervision. Thousands of Egyptian peasants are forced to work on the project for minimal compensation. They die by the hundreds from work-related accidents, starvation, and untreated illnesses.

Tenure of Cyril IV as Coptic Patriarch of Egypt. He pushes for a modernized Coptic Church and for advances in education, including the education of women.

Interventionist policies upset the delicate and constantly negotiated balance of power between the Maronite Christians and the Druze in the Mount Lebanon area. Muslim resentment erupts into Druze attacks on Christian villages, and spreads into Damascus. Several thousand Christians are killed. An Ottoman force is sent to restore order, but this does not satisfy the European powers, which demand autonomy for the Mount Lebanon region. An administrative unit is set up along sectarian lines but does little to quell tensions.

– Creation of the Alliance Israélite Universelle by Adolphe Crémieux . Schools are established throughout North Africa and the Levant for the purpose of educating the Jewish children of the Arab world under the auspices of European Jews.

Khedive Ismail assumes power in Egypt. Like Muhammad Ali, Ismail embarks on an extensive but costly modernization program. Because of the American Civil War, Egypt’s cotton is in high demand and fetches extremely good prices. However, when the war ends in 1865, prices will collapse, throwing Egypt back into financial difficulty.

The two Romanian provinces of the Ottoman Empire unite into a single autonomous entity.

The Suez Canal is inaugurated in a grand ceremony presided over by Khedive Ismail and attended by celebrities and royals from Europe. The canal opens a link between the Mediterranean and the Red Sea and facilitates trade between Europe and the Far East, including the British colonies in India. Ismail and the French government sign a 99-year agreement recognizing France as the Suez Canal’s primary shareholder and administrator. Egypt will have virtually no control over any matters pertaining to the canal, and will reap almost no economic gain from it. Britain, believing that the canal is too crucial to its own interests in Asia to be left in the hands of the French, is dismayed by this agreement.

Beginning of the first wave of Arab-American immigration, largely Christians from the Levant.

– In the French colony of Algeria, the Crémieux Decree makes Algerian Jews French citizens; the same privileges are extended to Muslim Algerians only on the condition that they renounce their religion. These rights will be rescinded in 1940 by the Vichy government of German-occupied France, but later restored.

The Iranian reformer Jamal Eddin al-Afghani , residing in Egypt, begins to gather a group of young disciples who are attracted by his Islam-based views on how to resist European expansion. His ideas will strike a resonant chord across the Arab world.

Death of Rifa’a at-Tahtawi, one of the first Egyptian scholars to grapple with the question of adjusting to the encroachment of the West in Islamic terms.

Khedive Ismail of Egypt is obliged to declare bankruptcy, the result of a series of financial woes including a major drop in cotton prices after the American Civil War; a costly (£3,000,000) judgment to resolve a dispute between Ismail and the Suez Canal Company; the high tribute Egypt pays to the Ottoman sultan; the rising costs of economic and industrial experiments; and the decline of trade routes through the Egyptian-controlled Sudan. This economic disaster paves the way for greater intervention by European powers in Egypt’s affairs. The British government manages to buy the remaining Egyptian shares in the Suez Canal Company, thus opening the door even wider for British intervention in Egypt, and divesting Egypt of any control it may have had in the canal.

At the urging of France and Britian, Khedive Ismail is deposed by Sultan Abdülhamid II, in favor of Ismail’s son Tawfiq.

French forces occupy Tunisia on the pretext that Tunisian forces have encroached on French-controlled Algerian territory. After a short military resistance, the Tunisian Bey reluctantly accepts the protectorate imposed by France, which assumes control of Tunisia’s finances and foreign affairs. Tunisia will remain a French protectorate for the next 75 years.

A Sudanese mystic named Mohammed Ahmed proclaims himself to be the Mahdi, or the Messiah, and rallies Sudanese tribes for a holy war to expel the British forces from the province.

– Britain occupies Egypt in order to protect the Suez Canal, restore political stability, and insure that Egypt’s debt continues to be repaid. Although Egypt is still nominally a province of the Ottoman Empire, the British Consul General now holds real power. Khedive Tawfiq remains merely a titular governor, a puppet of the British and a willing collaborator with the occupying forces.

After the death of Muhammad as-Sadiq in Tunisia, his successor, Ali, is forced to introduce pro-French administrative, judicial and financial reforms, solidifying French control over Tunisia.

– The British decide to evacuate the Sudan.

British General Gordon is put in charge of efforts to rescue and evacuate British citizens trapped in Khartoum and the other cities of the Sudan.

The Mahdi and his forces in Sudan capture and destroy the capital city of Khartoum, killing General Gordon in the process, but the the Mahdi dies of typhus shortly thereafter.

A Syrian Orthodox Church is established in Worcester, Massachusetts, to accomodate the growing number of Arab Christian immigrants to the area.

Sudan is placed under joint Egyptian and British administration.

The First Zionist Congress is held in Basel, Switzerland, and approves the goal of establishing a Jewish State in Palestine.