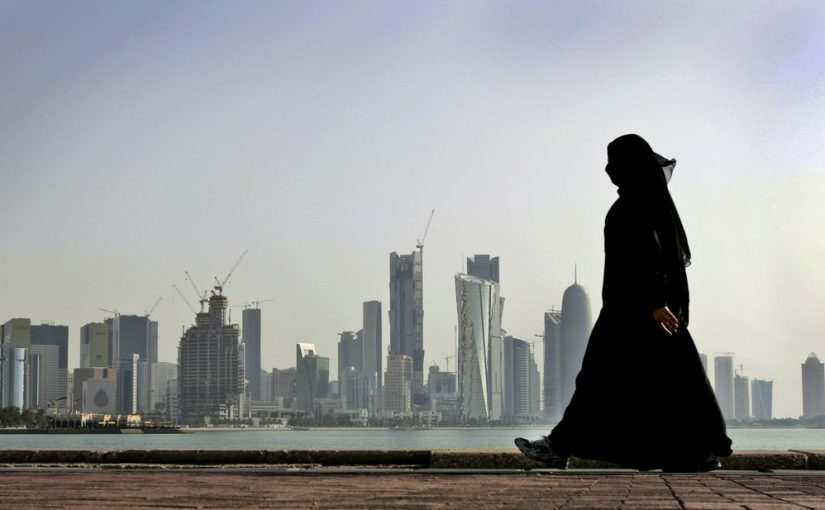 June 5th marked one year since Saudi Arabia, the UAE, Bahrain and Egypt severed relations with Qatar over its alleged support of terrorist organisations and close links to Iran. This included cutting off all air, sea, and land routes with Qatar. The Ministry of Foreign Affairs of Qatar maintains that there is “no legitimate justification” for the actions taken by the four countries and has repeatedly rejected the accusations levelled against it as “baseless”. Below we take a look at some of the most significant moments of the crisis during the past year.

How did the crisis start?

A hacker entered Qatar News Agency’s system and uploaded a news story filled with fabricated quotes attributed to Qatar’s emir, Tamim bin Hamad al-Thani, praising Iran and speaking warmly of Hamas and the Muslim Brotherhood. The regional press had begun to publish a slew of negative stories about Qatar, accusing it of supporting terror groups and working against U.S. interests, citing the QNA article as evidence. By early June, the hashtag (in Arabic) “Cut relations with Qatar”, was trending on Arabic-language Twitter.

A Year in Review 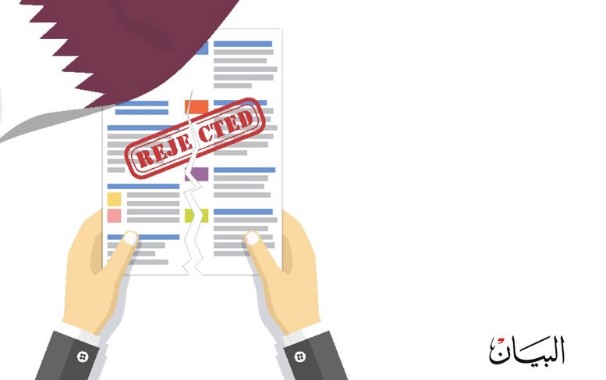 Saudi Arabia, the United Arab Emirates (UAE), Bahrain, and Egypt severed diplomatic relations with Qatar over its alleged support of terrorist organizations. The quartet cite Qatar’s close relations to Iran, which competes with Saudi Arabia for regional influence and has been accused of supporting extremist groups in Lebanon, Iraq, and Yemen.

Qatar’s support for the Muslim Brotherhood, which has been deemed a terrorist group, is also another point of contention between the Gulf states and Egypt. During the Arab Spring uprisings in 2011, Doha backed the exiled Muslim Brotherhood government under Mohamed Morsi, while Saudi Arabia staunchly supported military-backed Abdel Fattah Al Sisi.

Al Jazeera is another key point of dissent between Saudi Arabia and Qatar. In 2002, the Saudi government pulled its ambassador from Qatar after the news channel ran interviews that were critical of the kingdom’s ruling family. In addition, the news agency has been accused of providing a platform for extremist organizations such as the Muslim Brotherhood, as well as critical opinions of the region’s long-serving leaders. Doha has repeatedly denied the allegations as having “no basis in fact.”

The U.S. State Department questions the motives of Saudi Arabia and the United Arab Emirates for their boycott of Doha, saying it was “mystified” the Gulf states had not released their grievances over Qatar. In Washington’s strongest language yet on the Gulf dispute, the State Department said the more time goes by, “the more doubt is raised about the actions taken by Saudi Arabia and the UAE.” The State Department’s comments came in contrast to the language taken by U.S. President Donald Trump who has accused Qatar of being a “high level” sponsor of terrorism. Saudi Arabia, the United Arab Emirates and Qatar are key American allies. 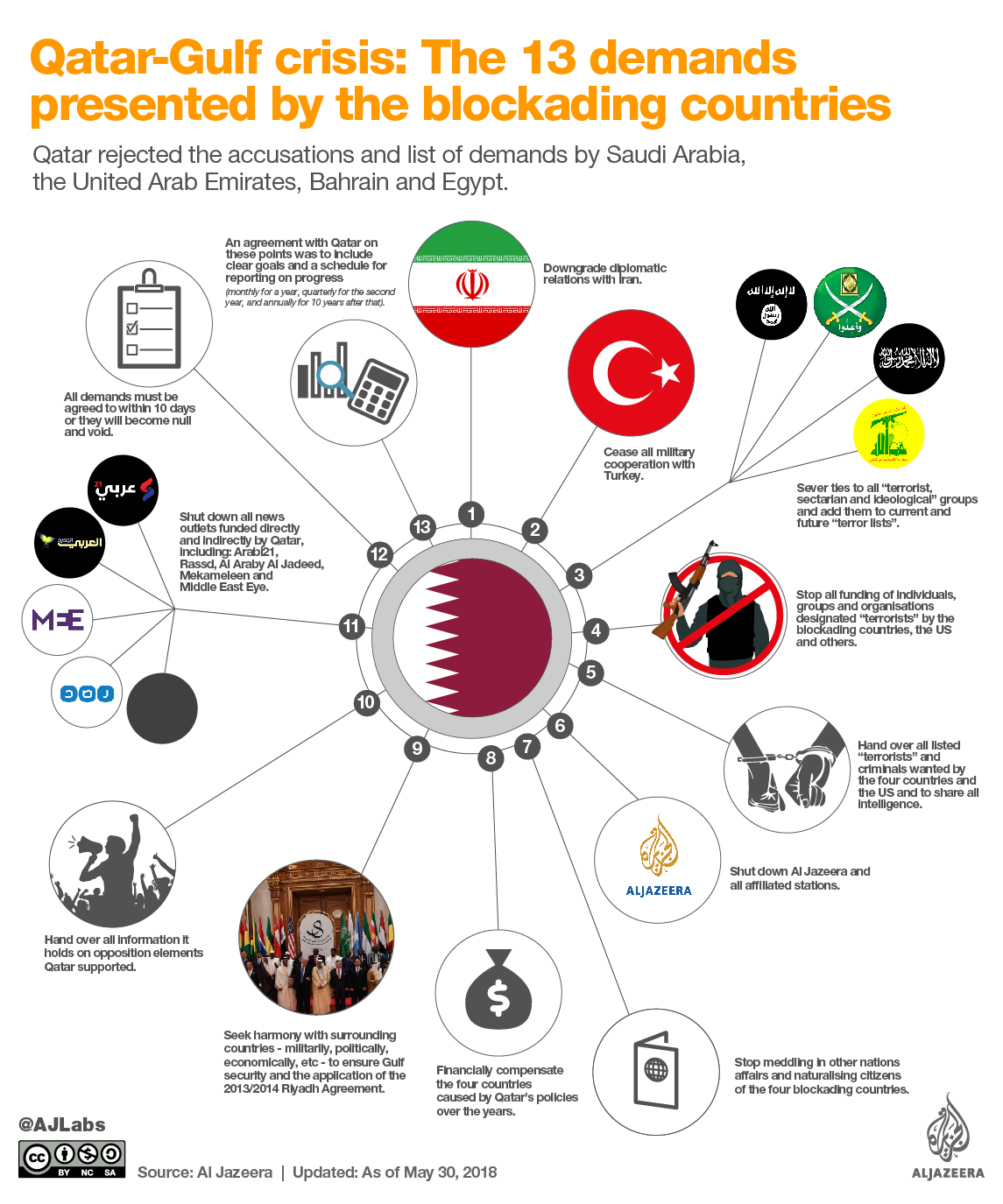 The State Department has approves a possible $270.4 million missile sale to the United Arab Emirates and a $197 million upgrade for Qatar’s air operation center, even as Gulf countries continue to impose a blockade on Doha. The proposed sale to the UAE Air Force includes 300 Sidewinder Block II missiles and associated parts and contractor support from Raytheon, according to a Thursday announcement from the Defense Security Cooperation Agency (DSCA), which oversees foreign military sales. 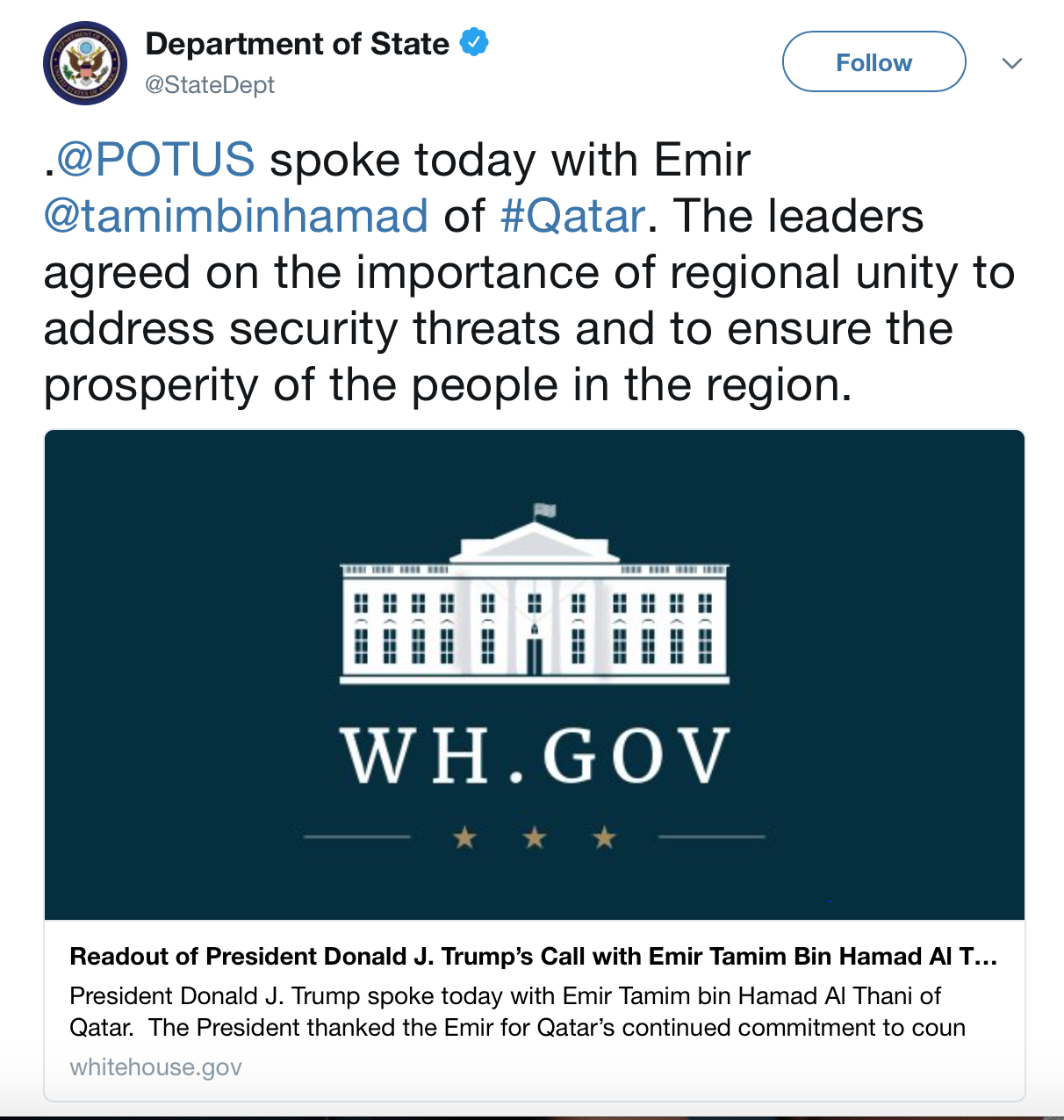 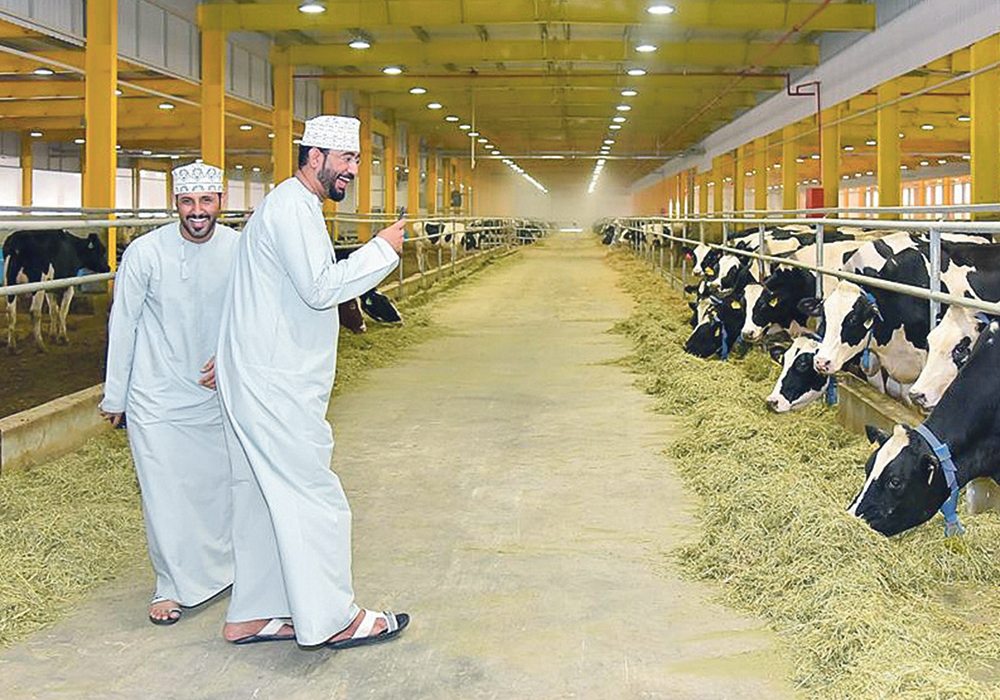 To overcome the challenges created as a result of the blockade, Qatar increasingly turns to Iran and Turkey — two countries listed in the 13 demands, purportedly for their destabilizing interference in regional affairs — to meet their needs. Iran and Turkey provide essential food items, airspace and trade partnerships, helping to ensure the small country stayed afloat in the the months after the imposition of the blockade. Trade with Iran has actually increased over the past year to $2 billion dollars, while for the first time, Turkey became a part of Gulf security, through its military presence in Qatar.

In further defiance of the quartet’s attempt to economically isolate Qatar, because of its oil wealth, the rich country has been able to invest in atypical industries, such as dairy, beef and agriculture, in order to reduce its dependency on food imports and increase its food security. Above, staff at Baladna Farm check out some of their herd of Holstein cows; the farm hopes to acquire 14,000 cows and eventually supply all of the dairy for Qatar’s 2.6 million people — an increase from the 40% it provided in January 2018. Qatar’s independence and resilience in spite of the blockade has been a source of continued frustration to those behind the blockade. Photo: Baladna Farm.

The GCC countries have been a stabilizing economic, political, social and military force in the Middle East. The Qatar crisis marks a substantial rift among Gulf monarchies and threatens a historical alliance between nations. Qatar’s perceived support of Brotherhood affiliates, coupled with Al Jazeera’s coverage of the Arab Spring uprisings in Egypt embittered its GCC partners. In fact, Al Jazeera was accused of providing a platform for Brotherhood members and sponsoring terrorism. With regards to the geopolitical rivalry between Iran and Saudi Arabia, the rift pushes Qatar and Iran closer together. The implications of the crisis disrupt not only top-level relations, but also permeates to the citizens of Gulf nations where one witnesses embroiled hatred towards the other. The United States and its allies rely on the Gulf, its global market, and established military bases to promote its interests and influence throughout the Arab world. Thus, the Gulf Crisis threatens regional stability and, as a result, the U.S.’s relations with its longstanding ally.

In response to the land, sea, and air blockade, Qatar expanded its diplomatic strategies to address its food shortages and alternative air routes. Overnight, Doha established new trade routes and enhanced existing ones with Oman, Turkey, Iran, India, etc. The United States plans to expand the Al-Udeid airbase, the biggest American military base in the Gulf, in an effort to reaffirm the base’s military-strategic importance. The Arab Center Washington DC (ACW) released a publication on the Gulf Crisis entitled, The GCC Crisis at One Year: Stalemate Becomes New Reality; the book discusses the severe repercussions of the GCC crisis, identifying three points that characterizes the current stalemate: the failure of mediation, the evolution of an alternate alliance, and the insistence on (as-of-yet) unmet demands. With the GCC-coalition of Saudi Arabia, the UAE, and Bahrain, and a fourth, Egypt, expressing no interest in reconciling and rebuilding relations, the crisis threatens the GCC alliance that has endured since 1981.