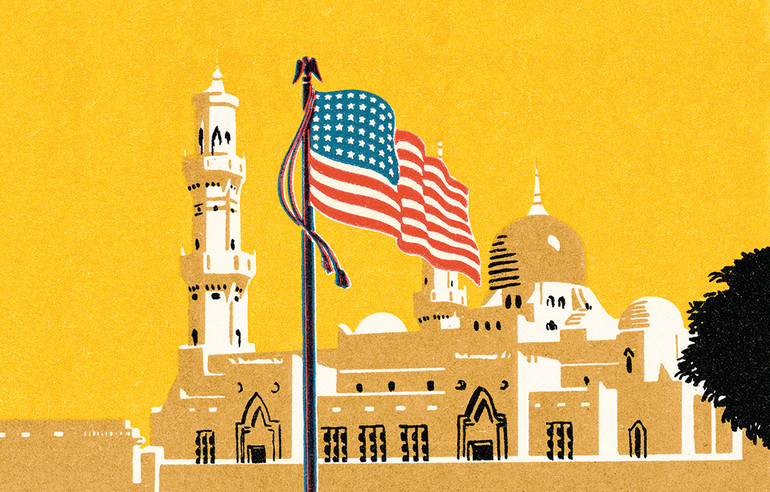 A June 2018 report by the Voter Study Group analyzes how most Americans perceive American Muslims vs. how American Muslims see themselves. Report authors, John Sides (George Washington University) and Dalia Mogahed (Institute for Social Policy and Understanding) discovered from their survey that almost 20 percent of Americans would deny Muslims who are American citizens the right to vote. What guides public perceptions of Muslims in America?

The 2016 presidential campaign and the first year of the Trump administration brought a renewed focus on Muslim populations both inside and outside the United States. As a candidate, President Trump suggested that large numbers of Syrian refugees were terrorists and falsely claimed that thousands of Muslims in New Jersey cheered the Sept. 11 attacks. He proposed a national database to register Muslims, enhanced surveillance of mosques in the United States, and a ban on Muslims entering the United States.

President Trump was rebuked by politicians from across the political spectrum. During the primary campaign, Governor Jeb Bush said, “You talk about closing mosques, you talk about registering people — that’s just wrong.” Speaker of the House Paul Ryan said that the Muslim ban violated the Constitution and was “not who we are as a party.” Trump’s future running mate and Vice President Mike Pence tweeted: “Calls to ban Muslims from entering the U.S. are offensive and unconstitutional.”

Nevertheless, as president, Trump has sought to carry out many of these policies — seeking to impose restrictions on refugees coming to the United States and on travelers to the U.S. from certain Muslim-majority countries. A Department of Homeland Security proposal called for long-term surveillance of Muslims in the United States who fit a certain demographic profile.(i)

Trump has also drawn attention to anti-Muslim sentiments from far-right groups, such as by re-tweeting videos shared by the British group Britain First that purported to depict acts of Muslim violence. This led to widespread condemnation within Great Britain, including by Prime Minister Theresa May. Trump eventually apologized.

More recently, however, Trump’s selection of John Bolton for National Security Advisor and nomination of Mike Pompeo for Secretary of State attracted fresh concern because of Bolton’s and Pompeo’s previous statements about Muslims. A recently published investigation by two Buzzfeed reporters also identified many state and local policymakers, mostly Republicans, who have also made harsh comments about Muslims.(ii)

These and other events make it even more important to understand how Americans view Muslims and especially Muslims living in the United States, who are projected to double as a share of the U.S. population by 2050.(iii) Unique data from the July 2017 wave of the VOTER Survey (Views of the Electoral Research Survey), as well as other surveys, reveal that Americans’ attitudes toward Muslims in the U.S. are distinctly unfavorable. Although Americans ascribe some positive traits to most Muslims — such as caring about their families — they ascribe negative traits to many Muslims as well. This negative stereotyping of Muslim Americans is more prevalent than stereotyping of Christians. It is also quite out-of-step with the actual attitudes and characteristics of Muslim Americans.

Unfavorable views of Muslim Americans are more prevalent among Republicans and conservatives, as well as among people with a more circumscribed view of American identity — such as those who believe that being Christian is important to being American, or those who believe that ethnic diversity is harming the United States. Less favorable views of Muslims are also tied to less favorable views of many other minority groups, demonstrating how prejudicial feelings are part of a broader “syndrome” that includes not only Muslims but also Jews, black people, Hispanics, and gays and lesbians.

Finally, there is substantial support for policies targeting Muslims — including restrictions on travel to the U.S. from Muslim-majority countries, surveillance of mosques in the U.S., and screenings at airports. Nearly one-in-five Americans would even deny Muslims who are U.S. citizens the right to vote. The civil rights and liberties of Muslim Americans have a tenuous status in American public opinion.

Thus, the social equality of Muslims faces significant hurdles. These hurdles will be even harder to overcome given our present political discourse, when harsh characterizations of Muslims come not only from the fringes of American political life, but from elected officeholders at all levels of government.