The Middle East is often characterized by perpetual conflict, religious extremism, poor governance, and people torn apart by sectarian, ethnic and national differences. However, there are a variety of initiatives whose goal is to promote dialogue and peaceful coexistence between groups of diverse backgrounds, demonstrating that divisions and enmity are man-made problems that can be overcome by empathy, mutual understanding, and cooperation. Let’s explore a few examples of communities building bridges despite the odds against them. Use these stories in units on diversity, cross-cultural understanding, and conflict-resolution in your classrooms.

An estimated nine million Syrians have fled their homes since the outbreak of the civil war in March 2011, taking refuge in neighboring countries or within Syria itself. With a weak economy, domestic political in-fighting and internal communal and sectarian divisions, Lebanon is struggling to cope with the influx of Syrian refugees inside its borders. Lebanese citizens see the new arrivals as competition for jobs, housing, and social services.

Better Together is a youth-led approach to peaceful coexistence spearheaded by Search for Common Ground, an NGO that strives to change the everyday interactions between groups of people in conflict. Launched in 2014, the two-year project’s primary objectives were to promote dialogue and trust-building between 320 Syrian and Palestinian refugees and Lebanese youth aged 15-25 from 8 different communities, and to advocate respectful and collaborative relationships. 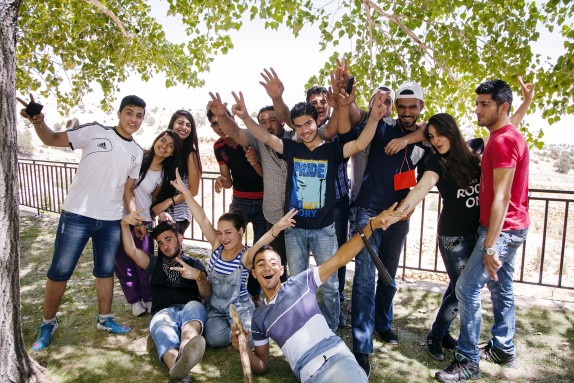 The first phase of the project involved two summer camps and integrated conflict resolution training with artistic workshops in drawing, theater, music, and film. After the two summer camps held in August 2014, the mixed team of Syrian and Lebanese artists traveled across the 8 communities to conduct follow-up workshops to develop youth creative outlets resulting in the production of videos, the writing of songs, the performance of a theatrical play, and the creation of comic strips, all with the aim of reaching out to the rest of the community and spreading the message of tolerance and acceptance of the other.

Equipped with the necessary tools for alternative models of thinking and behavior while building their confidence, the youth developed the capability of promoting dialogue based upon narratives of tolerance and peace, allowing them to become ambassadors for positive change and conflict transformation. The result is that youth will ultimately mitigate tensions within their respective communities. Better Together also built relationships with Lebanese media to broadcast short videos detailing the project’s efforts across local TV channels. The videos were also shown at public events in order to exhibit the artistic outcomes of the project. These artistic performances gave community members the opportunity to explore issues like social cohesion, stereotypes, and misconceptions about “the other.”

Learn more about the Better Together program here.

Sports, music and dance are universal, non-verbal languages that connect people around the world. Each has been used to bring Israeli and Palestinian youth together despite the perception that these two groups are eternal enemies destined to inherit the bitter and long-standing conflict of generations before them.

The Israeli Tennis Centers was launched in 1976 to bring the game of tennis to the people of Israel, regardless of background, religion, ethnicity or physical ability. Now one of the largest social service organizations for children in Israel, ITC serves over 20,000 Israeli children every year, many of whom are in underprivileged neighborhoods, providing disadvantaged children with a safe, structured and nurturing environment. The ITC recognized early on the need to provide opportunities for children of differing backgrounds to come together on neutral ground, and created coexistence programs for Arab and Jewish children that encourage both the children and their families to explore one another, engage in dialogue, set common goals and ultimately realize that they can all live together in peace.

Israeli society is a diverse and complicated mix of Jews, Muslim Arabs, Christian Arabs, Bedouins and Druze as well as refugees from many countries around the world. In many instances, ignorance and distrust leads to tension, violence and conflict, which, once ignited, are difficult to dissipate. Children who grow up in regions of conflict are deeply affected by the rhetoric of violence, with each group developing negative stereotypes of one another.

Sport has the unparalleled ability to transcend barriers of language, politics and religion, and is a proven powerful tool for promoting tolerance, cross-cultural relationships and ultimately, peaceful coexistence. The ITC aims to alter negative perceptions while instilling positive ones, through joint sporting activities held for Jewish, Arab, Druze and Bedouin children in mixed cities such as Jerusalem, Jaffa, Beer Sheva, Tiberias, Haifa, Sajur, Yokneam and Akko. This grassroots, bottom up approach allows average Israeli citizens to lead the way towards peaceful coexistence in Israel and the entire Middle East region by promoting equality and tolerance, and helps to instill desperately needed hope in today’s turbulent times. Fulfilling its slogan, Serving a Better Future for Children, ITC caters to children and families from all religions and ethnic groups.

For the first time in Israel’s history, two Arabs represented the country at the Special Olympics in Athens, Greece

Yes, ballroom dancing! In a hopeful and earnest documentary, Arab and Jewish children are brought together from different schools in Jaffa, Israel, for the improbable purpose of learning competitive ballroom dancing. Confronting historical barriers and cultural reservations, several of the young couples defy expectations and excel on the dance floor. After decades abroad, renowned ballroom dancer Pierre Dulaine returns to his hometown of Jaffa, Israel, nostalgic for the streets of his youth but nervous and dismayed by the strong current of racial animosity that now serves as the norm. Fueled by his belief in dancing’s power to build self-esteem and social awareness, Dulaine brings his popular Dancing Classrooms program to three diverse, Jaffa-based schools where he teaches ballroom basics to the ethnically-mixed population of children. Dulaine selects the most focused dancers to train for a citywide competition, pairing Palestinians with Jews, putting many of the children’s and, more pointedly, their families’ beliefs to the test. 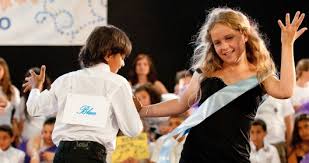 As Dulaine’s passion for dance and no-nonsense style of teaching rubs off on the reluctant children, the competition offers the perfect window into their lives. Hilla Medalia’s story beautifully shows these historical archenemies forging an innocent but ultimately meaningful relationship that quickly takes on a much larger significance than what initially meets the eye. Dancing in Jaffa is a sweet and incredibly moving tale filled with moments of truth, poignancy and humor, offering a glimmer of hope in the intractable conflict. Through cultural diplomacy, the lives and perspectives of the experiment are dramatically transformed.

The film is available through Netflix.

Lastly, the YMCA Jerusalem Youth Chorus is a choral and dialogue program for Israeli and Palestinian high school students in Jerusalem. Established in 2012, the chorus is one of the few coexistence initiatives to weather the hatred and violence that have erupted on both sides over the past year. Its mission is to provide a space for young people from East and West Jerusalem to grow together in song and dialogue. Through the co-creation of music and the sharing of stories, the chorus seeks to empower youth in Jerusalem to become leaders in their communities and inspire singers and listeners around the world to work for peace. The group does not ignore the politics but creates an alternative environment where young Israelis and Palestinians can discuss their differences while producing music together. They have performed at the Kennedy Center and for the Late Show with Stephen Colbert, and received recognition in numerous media outlets. Chorus members bring their cultures’ respective musical traditions to their performances; the beautiful and inspiring results of their collaborations build peace in a land where world leaders have and negotiations have failed time and again.

Founder of the chorus, American Micah Hendler explains, “What I saw in starting the chorus was that if you look at things only through a political lens, the situation is pretty hopeless. But if you consider it, people are not only political objects. They have lives; they want to connect.  There are ways of getting beyond the intractable structures we have set up for ourselves.”