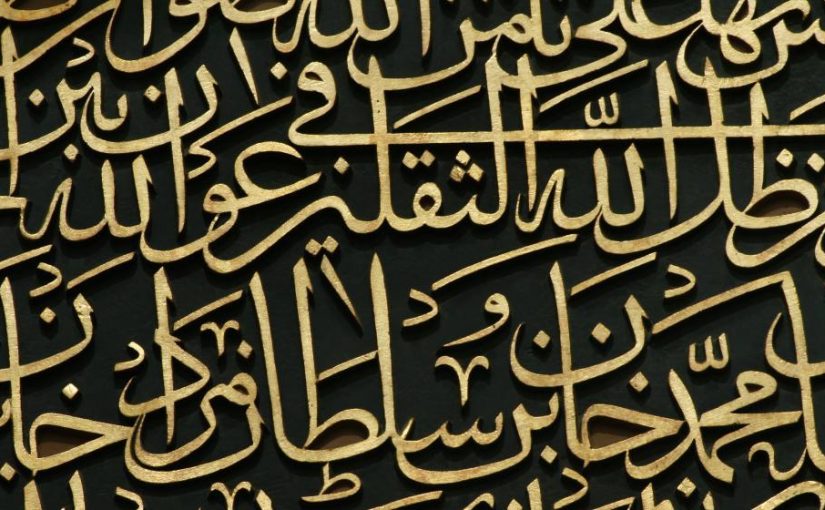 You have zero interest in algebra, so you grab some alcohol — or maybe a coffee with extra sugar — sit on the sofa or mattress, eat an orange or some candy, and read a magazine or surf the web with Safari and Adobe. And just like that, you’ve used a dozen words that came from Arabic.

Yes, thanks to the traffic of goods and culture around the Mediterranean throughout history, English has many common words that it got from Arabic. It didn’t borrow all of them directly; they mostly came filtered though Latin, Turkish, French, Spanish, German, and/or Italian, and have changed in form — and sometimes meaning — since they left Arabic. But our language has accepted all these imports, and they have assimilated well and been very useful.

The electronic device you’re reading this on wouldn’t exist without digital programming, which wouldn’t exist without the number 0 (zero), which — believe it or not — Europeans didn’t think of as a number until the Italian mathematician Fibonacci introduced it to them in the early 1200s. He learned it from Arabic culture in North Africa, where he grew up. He took the Arabic word sifr, meaning “empty” or “nothing,” and Latinized it as zephyrum. That got trimmed down a little bit over time to the Italian zero. Of course, along with the concept, he needed a way of writing it. Roman numerals didn’t have a zero (of course), and anyway they’re not good for doing decimal mathematics: It’s much more bother to work with XX times LXVII than with 20 times 67. So he borrowed numerals from Arabic, too — which is why typographers call our digits Arabic numerals. (The way they look in Arabic now is different from how they look for us now.)

Zero and the numerals aren’t the only math that English owes to Arabic culture. Algebra comes from Arabic al-jabr, which refers to a reunion of broken parts, like setting a bone. A 9th-century Arabic treatise on math gave us the figurative use of the term. The author of the treatise was al-Khwarizmi, whose name has become another mathematical term: algorithm.

Before it was a software company, adobe was — as it still is — a kind of sun-dried brick. We got the word from Spanish. But Spanish got it from Arabic. Much of Spain was under Muslim (“Moorish”) rule from the early 700s into the 1400s. One of the many things Spanish adopted from them was al-tub, “the brick,” which changed over time to adobe.

This word so strongly associated with expeditions in Africa came from an African word for “expedition”: the Swahili safari. But Swahili got it from the Arabic safar, or “journey.” These days Mac users go on Safari and never leave their sofas. It’s probably safer that way.

Some of us sit on a sofa and some sit on a couch, but it’s the same piece of furniture. Those of us who call it a sofa are using a word we got from Turkish, which got it from the Arabic suffa, which refers to a raised platform with carpeting on it — which is a more Arabic place to sit than a couch.

Speaking of furniture, Europeans didn’t always sleep on big, soft, cushioned things. Bedding was sparer throughout much of their history. But the Crusaders, for all the bad things they did, at least learned a few things from Arabic culture, one of which was the idea of sleeping on cushions. And the Arabic word for the place where the cushions were thrown down is matrah, which came from taraha, “throw.” It came into Latin as materacium or materatium, and from there Italian and the other European languages picked it up.

Europeans got a lot of our favorite things from trade with points farther east. Oranges come from South and East Asia originally, and the Sanskrit word for them was naranga; that became the Persian narang, which became the Arabic naranj. It was Arabic traders who brought oranges to Spain and Sicily, and the word came with them. It lost its first n through what linguists call reanalysis: the old French un norenge became un orenge. English got the word from French.

We owe a lot of enjoyment to Arabic traders. They brought sugar to Western Europeans (first the Italians and French, and from them the English), plus their word for it, sukkar, which they in turn got from Sanskrit, sharkara.

We also got candy from Arabic — qand — which referred to the crystallized juice of sugar cane. Arabic got it from Persian, which got it from Sanskrit.

Of course if Arabic gave us sugar and candy, it also gave us syrup. In this case, the original is sharab, which refers to a beverage: wine, fruit juice, or something sweeter.

Each European language has a slightly different version of the word for this vegetable — French is artichaut, Italian is carciofo, and Spanish is alcachofa, for example — but they all trace back to al-karshufa, which was what it was called in the Arabic spoken in Spain (slightly changed from the classical Arabic al-harshafa).

Cotton isn’t originally from Arabia — it’s native to India and Central and South America, among other places — but since Westerners were doing trade with traders from Arabia, we (and the rest of Western Europe) got our word for it from Arabic, qutn.

We got this word from Italian, caffè, which was taken from Turkish, kahve. Turkish got it from Arabic, qahwah. We also got the beverage from Arabia (via Italy via Turkey); Arabia in turn got it from eastern Africa.

Are you surprised that alcohol comes from Arabic? The word does, but the thing doesn’t. In the original Arabic, al-kuhl means “the kohl,” which is to say a cosmetic powder for the eyes. It was made by an extraction process from a mineral, and European chemists took to using alcohol to refer to anything produced by extraction or distillation. But then the “alcohol of wine” (the spirit you get from distilling wine) took over the name exclusively.

A magazine such as The Week is a veritable storehouse of well-turned prose, which is why it’s called a magazine — the word originally means “storehouse.” It’s still used in the military for a storage place for explosives. We got the word from French (which now uses magasin to refer to a store), which got it from Italian, magazzino, which came from Arabic, makzin.

Article written by James Harbeck and originally published by The Week on March 9, 2017.